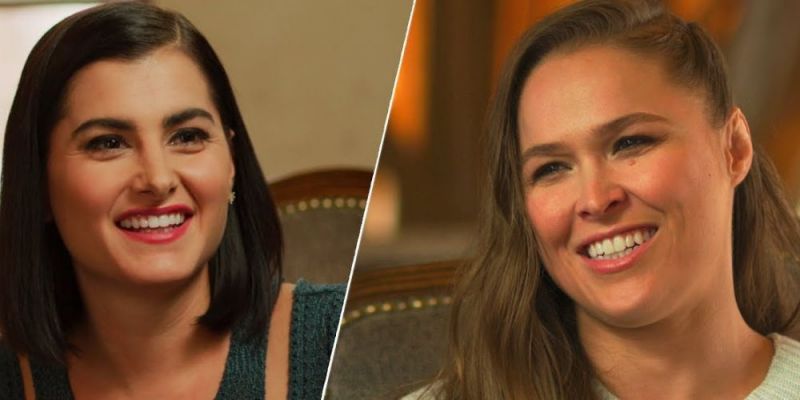 Not too long ago, Ronda Rousey was the talk of the town. The former UFC women’s bantamweight champion was rag-dolling fighters, beating her opponents inside a minute. From former Olympians to ex-champions in promotions like Strikeforce, “Rowdy” had very little problem in disposing off her rivals.

Ronda Rousey made her UFC debut against Liz Carmouche at UFC 157, winning the fight in the first round. The former Olympian has since acted in movies, becoming a major draw for the UFC, before joining WWE and making her debut at WrestleMania last year. Ronda also made history, when she, along with Charlotte Flair and Becky Lynch, became the first woman in WWE history to headline the mega-event.

Rousey recently sat down with UFC’s Megan Olivi, and revealed that her UFC debut “felt bigger” than competing at WrestleMania.

“[WrestleMania] felt big, it’s just I think it just has to do with the time, with the perspective. Me and Liz Carmouche, it felt bigger to me”, Rousey said to Megan Olivi (transcript via MMAFighting). “Even though it was years ago and not as many people watched and it was in the Honda Center, which maybe holds like 16 to 20 thousand compared to WrestleMania, where it was in front of like 80,000 people and millions of people watching. I just felt like me and Carmouche was the most pivotal moment, where everything had to happen that way or else women’s MMA would have ended before it started.

“With WrestleMania, it just felt like all the stars were aligned and the whole universe was conspiring for us to succeed and I had not a single doubt in my mind that we would. But for Carmouche, it was so many outside factors of like, the numbers had to do well and I had to win the match, but I had to win the match in an exciting way. There were just so many other different factors that I had to worry about and I feel like the stakes were higher in a way even though the venue and the audience was smaller.”

Ronda also main-evented the biggest UFC PPV in terms of attendance, when she fought Holly Holm at UFC 193. Since then, the likes of Rose Namajunas and Amanda Nunes have stepped up, carrying their respective divisions.