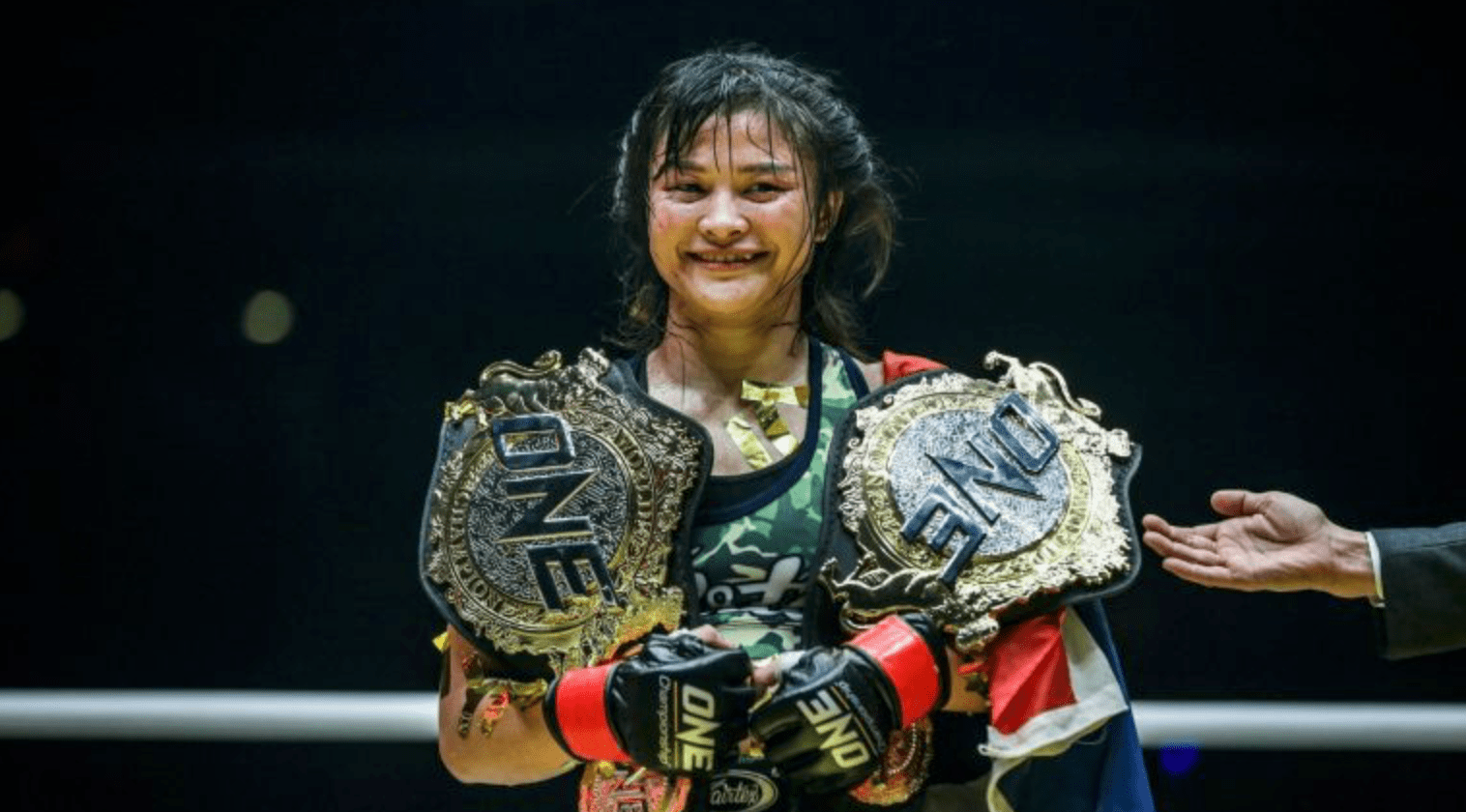 Martial arts sensation Stamp Fairtex is a rare concurrent two-sport World Champion, holding both the ONE Super Series atomweight kickboxing and Muay Thai titles. But ONE Championship Chairman and CEO Chatri Sityodtong recently shared his thoughts on the possibility of Stamp being hoisted up onto a totally different realm of being a three-sport World Champion.

Sityodtong recently went home to Thailand, prior to ONE: WARRIORS OF LIGHT and visited the famous Fairtex gym where he saw Stamp in training. In a Facebook post shortly after, Sityodtong said he was “super impressed” with Fairtex’s fast-developing mixed martial arts skills and also revealed the 21-year-old is eyeing the ONE Women’s Atomweight World Title, which is currently in the hands of Angela Lee.

“If you notice our photo together, Stamp has three fingers pointed up because her dream in the future is to win the ONE Women’s Atomweight World Championship in the sport of mixed martial arts to add a third sport to her world title collection,” Sityodtong said in the post.

Fairtex claimed the ONE Women’s Atomweight Kickboxing World Title from Kai Ting Chuang in October 2018 at ONE: KINGDOM OF HEROES before she dominated Janet Todd three months later at ONE: CALL TO GREATNESS to capture the inaugural ONE Women’s Atomweight Muay Thai World Title. Now, she wants to put her stamp on another sport and Sityodtong teased of Stamp’s debut in the ONE Circle.

“Stamp will be making her MMA debut later this year. If there is anyone who can be a World Champion in Muay Thai, Mixed Martial Arts, and Kickboxing at the same time, it is Stamp,” he added.

The two-sport World Champion already has 19 seconds of MMA experience under her belt. She beat Rashi Shinde with a spectacular head kick knockout last July, on the ONE Warrior Series.

Sityodtong also shared how two of the best camps paved the way for the brightest stars today, such as Fairtex and expressed gratitude for “laying the foundation” for future fighters.

“When I was a kid in Thailand, the biggest names in Muay Thai were my teacher Kru Yodtong Senanan and Sia Banjong. In those days, Sityodtong and Fairtex were fierce rivals as the two best camps in Thailand. Without a doubt, these two great legends inspired all of us with their hearts of gold and their purity of love for Muay Thai,” he said.

“I will always be forever full of gratitude and appreciation to both Kru Yodtong Senanan and Sia Banjong for laying the foundation so that Prem and I can carry the torch for the future. We all stand on the shoulders of the great men and women who came before us.”

Stamp is currently scheduled to defend his Muay Thai title at ONE: LEGENDARY QUEST, which take place June 15th at the Baoshan Arena in Shanghai, China. She faces Alma Juniku of Australia.