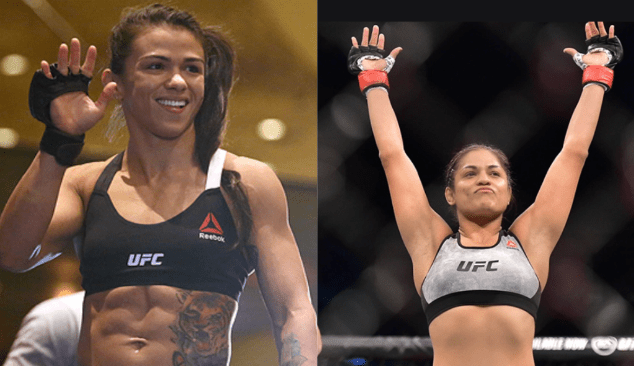 We don’t want to alarm you but the UFC is already planning ahead to December. It feels like only a couple of months ago that the UFC held its first card of the year in Brooklyn. Yet here we are in August and the UFC has announced a couple of huge women’s fights to go down in the lead up to Christmas.

According to ESPN, the UFC is finalising two exciting bouts to go down in December in Washington, between Aspen Ladd and Yana Kunitskaya at bantamweight, and Claudia Gadelha and Cynthia Calvillo at strawweight.

Ladd is coming off the first loss of her professional career, having lost to Germaine de Randamie, via TKO in the main event last month at UFC Sacramento. Before the loss, the 24 year old had won her first eight fights since turning pro in 2015. The first five wins came in Invicta FC, with the last three coming in the UFC.

Kunitskaya (12-4) is the former Invicta FC bantamweight champion and has won her last two fights, against Lina Länsberg and Marion Reneau. The 29 year old made her UFC debut last year, when she lost to Cris Cyborg, whilst challenging for the UFC featherweight title.

The 30 year old Gadelha (17-4), is coming off of a unanimous decision win over Randa Markos at UFC 239. The Brazilian has previously fought for the UFC strawweight title, but came up just short against Joanna Jedrzejczyk in 2016.

Calvillo (8-1) has gone 5-1 in the UFC, with her only loss coming against Carla Esparza at UFC 219. The 32 year old American has won her last two bouts though, beating Poliana Botelho and Cortney Casey. Calvillo also has an amateur win over Ladd, which was the only amateur bout Ladd lost in nine.

UFC Washington goes down at the Capital One Arena on December 7th.

Which matchup are you looking forward to seeing most?