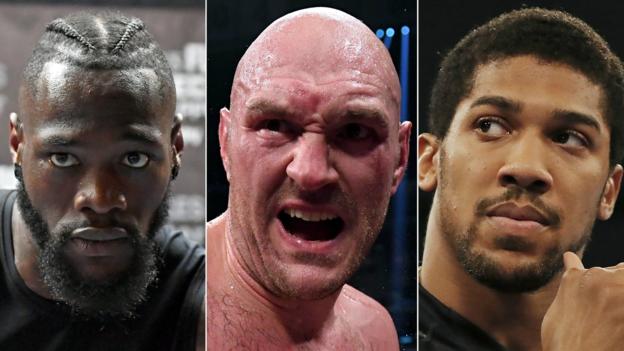 Anthony Joshua has said that he’s more than ready to face Tyson Fury and Deontay Wilder. Out of the three high-ranking heavyweights, two of them lay claim to world title belts. ‘AJ’ is the reigning WBA (Super), IBF, WBO, and IBO champion, while ‘The Gypsy King’ holds the WBC and The Ring heavyweight titles.

In terms of fights, both Fury and Wilder are more experienced than Joshua. ‘The Gypsy King’ is undefeated in 31 fights, while ‘The Bronze Bomber’ has won 42 of 44 fights, 41 by way of knockout. Despite totalling only 24 career fights, ‘AJ’ believes that he has faced more high-profile opponents than his two rivals. Speaking to Sky Sports (as transcribed by The Mac Life), the 30 year old said that he doesn’t consider them to be a threat.

“Fury has been professional much longer than me. He should be looking to retire soon,” Joshua said. “If he wants to cement his legacy, I’m here and ready. I’ve built myself into this position.

“I’ll challenge Fury, I’ll challenge Wilder. These guys aren’t the biggest names that I’ve fought on my record anyway. They are just another heavyweight. Look at my record. They are not the best fighters that I have challenged. When they are ready, I’m here to fight.”

Before he can face either man however, Joshua needs to get past Kubrat Pulev on December 12th. While Fury and Wilder meet for a third time one week later. After losing his WBC heavyweight belt to ‘The Gypsy King’ in their second fight, ‘The Bronze Bomber’ immediately exercised his rematch clause to set up a trilogy.

Joshua is ready to prove all those who doubt him wrong, insisting that he’s not afraid of Fury.

“He’s on a completely different journey. I want to steam through,” Joshua said. “I haven’t got fear of Fury – whether he’s got a better chin than me, a better jab than me, whether he’s all of this stuff that people say. So be it. Let me go in there and prove myself. Show you who I am and what I can do.

“I’ve fought five champions and been in two unification fights. I’m a two-time heavyweight champion in the space of 24 fights and a [seven-year] career. It shows you I am serious. If Fury is serious, I’ll take that fight seriously too.”

How do you think Anthony Joshua fares against Tyson Fury and Deontay Wilder?