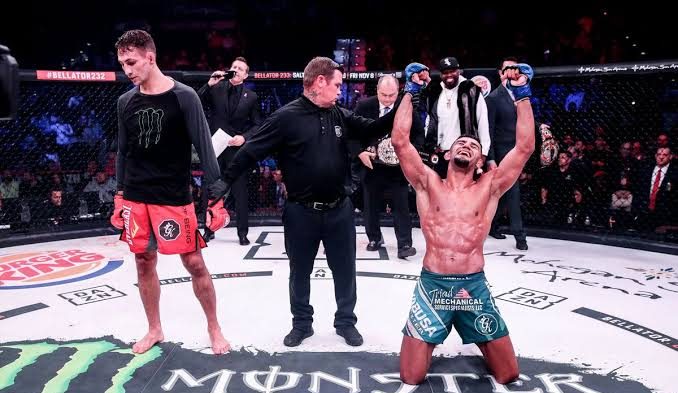 This past weekend, Bellator MMA crowned a new welterweight champion, with Douglas Lima defeating Rory MacDonald at Bellator 232 in the finals of the Welterweight Grand Prix. On the same card, Baby Slice picked up a quick win, drilling his opponent with vicious elbows as he tried to shoot in for a take down.

Kevin Ferguson Jr., better known to the MMA fans as Baby Slice, picked up a quick win this past weekend at Bellator 232 over Craig Campbell. Taking a short-notice fight, Ferguson Jr. connected with multiple elbows to the head of Craig, ending the contest in just 38 seconds. However, replays showed that at least one of the elbows landed on the back of Campbell’s head.

According to the report, the commission rules allow the use of instant replay in “an exhibition stopped due to injury to an unarmed combatant in order to determine whether the injury in question was caused by a legal blow.”

The president of the Tribe Department, Mike Mazzulli said that he acted in accordance with the commission’s rules, overturning the win.

“In the case of the above-referenced bout, upon review of the tape, we have determined that the injury that stopped the bout was the result of an accidental foul; elbows to the back of the head”, he said. “Since the bout was stopped in the first round of a bout scheduled for three rounds, we have determined that the result of the bout must be changed to ‘no-contest’.” (h/t BJPenn.com)

Douglas Lima won his title back at Bellator 232, defeating former champion Rory MacDonald. After the fight, Lima talked about a man that beat him many years ago, but lost his fight this weekend, Ben Askren.

Askren defeated Lima at Bellator 64, when Douglas was riding on a couple of wins. Now however, Lima believes “Funky” Ben doesn’t have that hunger anymore. Talking to Jimmy Smith on The Luke Thomas Show, Lima explained why he thinks Askren is on a two fight skid.

“It’s crazy man, because he’s not old”, Lima said (h/t BJPenn.com). “He’s like 35. I noticed he just doesn’t look as good of in-shape like he was before. I don’t think I see any hunger in him when he steps in there. Yeah, man I think there’s definitely something missing.”

Douglas Lima also said that Ben Askren can find his mojo back, if he retains that hunger.

“I think if he can pull it together, I’m sure he can still beat a lot of these guys. But right now there’s just something. He’s got to come back, sit down, and realize what it is, cause it just doesn’t seem like he’s very focused on the training. People are evolving, everybody’s getting good nowadays so there’s not going to be an easy fight nowhere.”