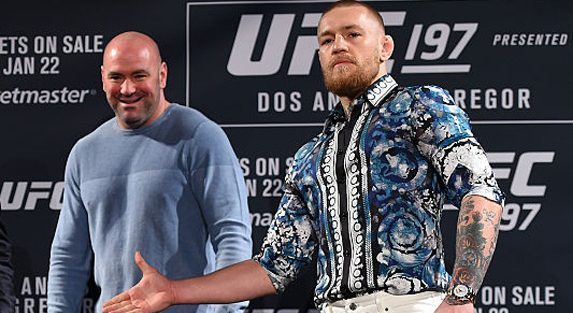 Dana White has been a busy man lately. With UFC moving to ESPN, their first event on ESPN+ saw Cejudo beating Dillashaw in the very first round. While there has been controversy surrounding the ending — and Greg Hardy’s fight, White was not given enough breathing space to fully comprehend what had happened.

Because Conor McGregor decided to take to social media to invite Cerrone to a ‘Red Panty Night’.

Ever the gladiator, Cerrone immediately embraced the challenge, even thanking Conor for ‘the honour’.

During the post-fight press conference, Dana White was asked about a potential showdown between the two gunslingers. And Dana was in no mood to shoot down self-booked fights between two of his most loyal employees.

“Yeah, I mean anything is possible,” White responded (transcript via MMA Fighting). “If those guys want that and the fans want to see it, that’s what I do.”

“Don’t run out there and say that’s the fight I’m making. I don’t know what I’m gonna do, but I like the fact that two of these guys that are complete dogs and fight anybody — willing to fight anybody — want to fight each other. That’s fun.”