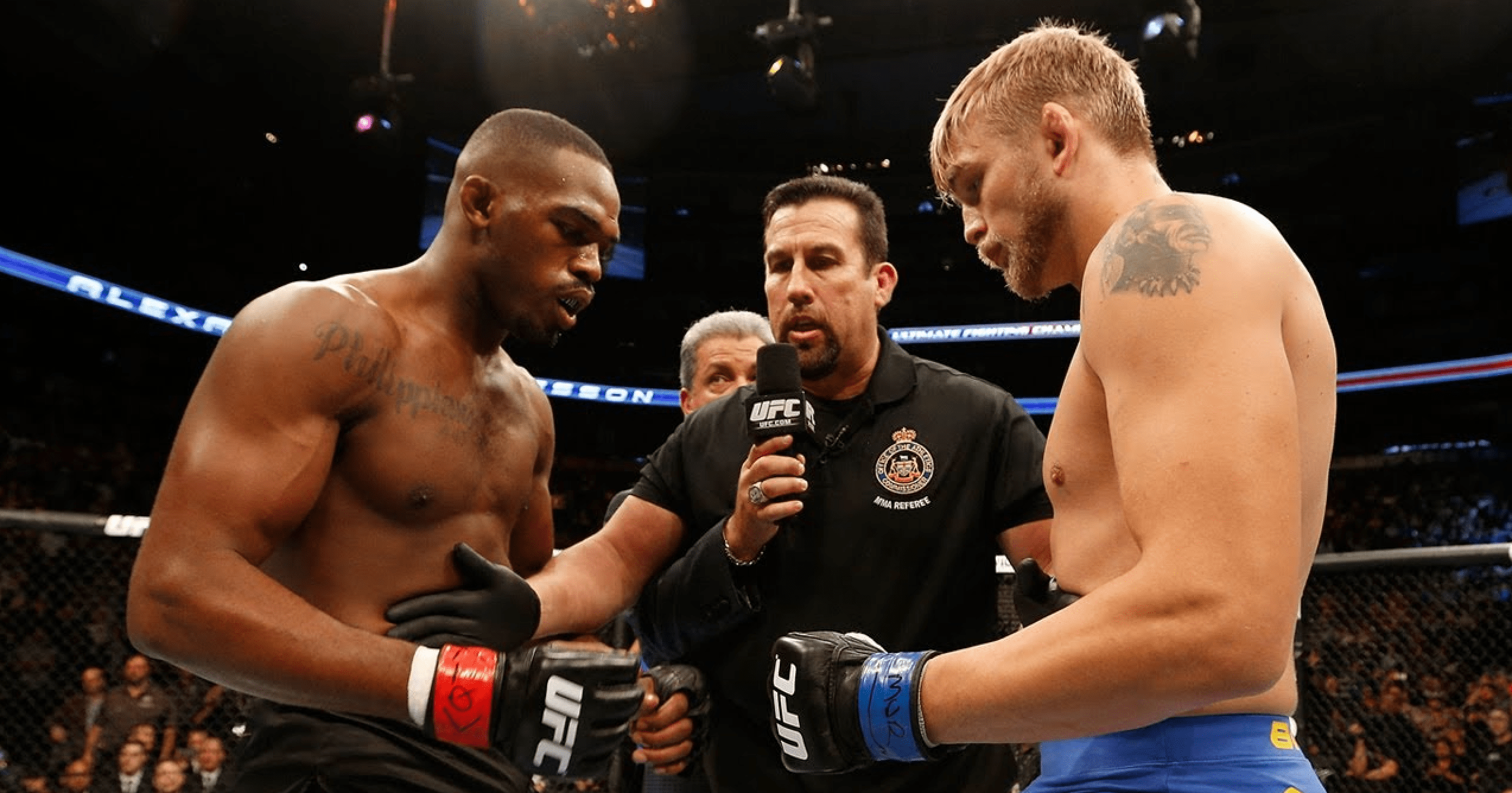 If you ask most hardcore MMA fans, the chances are they’ll tell you that Jon Jones’ first bout with Alexander Gustafsson was one of the greatest title fights in UFC history. But, according to storied referee ‘Big’ John McCarthy, the epic war would have had a different outcome, if someone else had officiated the fight.

Jones faced Gustafsson at UFC 165, which went down in Toronto, Ontario, in November, 2013. Heading into the fight, the consensus was that ‘Bones’ would cruise to a win over the Swedish fighter. But, the latter pushed the champion to his limits. So much so, the American emerged from the fight battered and bruised. He also walked away from the fight with the unanimous decision win, and the light heavyweight crown.

Recently the aforementioned McCarthy was talking with Josh Thomson about the memorable Jones – Gustafasson bout, during their Weighing In podcast (as transcribed by BJ Penn.com). During the show, the storied referee outlined why he believes if someone else had officiated the bout, Jones would have lost the belt.

“Let’s talk about it this way, Jon Jones thinks I hate him. He actually at one point you know he wanted to, it was before the Daniel Cormier fight I think, but he came out in the media and said he didn’t want me doing his fight. And it was because of the fight that he had with Vitor Belfort in Toronto, Canada. Where you know, there was kick thrown and stuff. But it’s ok that Jon feels like ok you know he doesn’t like me. Is it that I didn’t like Jon? No! I really did like Jon Jones.

“And I’ll be flat out honest. Jon would have lost his world title if I wasn’t doing his fight at UFC 165 when he fought Alexander Gustafsson. There is not another referee that would have told the doctor ‘No I am not stopping the fight’ and let him go out for the fifth round. And let that fight continue. Because referees are not going to put their career on the line for a fighter. So there going to say ‘you want it stopped?’ and then do this with there hands (motioning to stop the contest) and the fight is going to be over. Alexander Gustafsson is going to be the winner.”

McCarthy proceeded to elaborate after Thomson asked him for more details.

“When Jon Jones fought Alexander Gustafsson he got hit with a, I think it was a right hand that was on the right eye, in the first round and split his eye open. And he went through the fight, second round, third round, and then the cut got a little bit worse at the end of the third round. At the end of the fourth round the doctor came in and looked at me and he says ‘you know what I don’t like the way his eye is looking, I think we should stop the fight’. And I looked at it, and Jon had just won the fourth round. You know, came back because Alexander was winning it but then Jon came back and won and almost finished Alexander in that fourth round. He was the champion and he had been fighting with the eye the way it was for the entire fight. And never was he dabbing at it or anything.

“So I looked at him and I said ‘He just won that last round I don’t think we need to stop this fight’. He goes ‘I don’t like it’. So I said ‘I tell you what, we’re going to let the fight go on and if I see that cut change at all, I’ll stop the fight and bring you in’. Right. So he said ok and he (Jon Jones) goes out and I am thinking to myself I am never stopping this fight. Ok, because I am not going to take someone’s title based on a cut that.. you know, I know what bad cuts are and that wasn’t… I am not saying I am smarter than the doctor but when it comes to injuries in fights I am smarter than the doctor. Especially when it comes to cuts. So that’s how much I hated Jon Jones.”

It’s pretty, interesting to hear McCarthy make this claim. Is he right? Would another ref had stopped the fight? Maybe.

You can’t help but wonder, however, how history would have been altered, if McCarthy had elected to stop the fight. Would Jones have recovered from the loss and reclaimed the belt? Would he be in the greatest of all time mix today?

And how would Gustafsson’s career from that point unfolded if he had taken the light heavyweight title from Jones at UFC 165? We’ll never know. ‘The Mauler’ is set to come out of retirement at UFC Fight Island 3, in a heavyweight clash against former champion, Fabricio Werdum.

How do you think the last seven years would have played out in the UFC light heavyweight division, if Alexander Gustafsson had have beaten Jon Jones at UFC 165?