The Tension Between Cris Cyborg And Dana White Escalates Further 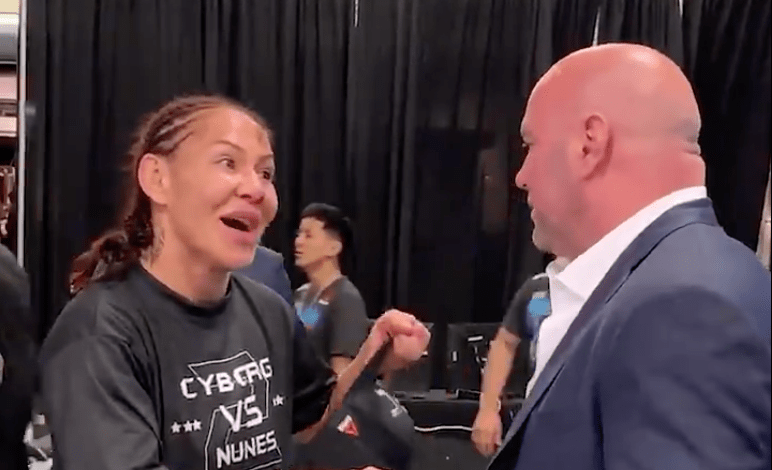 A lot of the talk leading up to UFC 240, was whether we’d see Cris Cyborg fight in the UFC again after her co-main event against Felecia Spencer. Since she lost to Amanda Nunes at UFC 232, UFC president Dana White has insisted that Cyborg doesn’t want to fight Nunes again. Cyborg hit back at Dana prior to last Saturday night and stated that she wouldn’t talk about a possible rematch with Nunes until after UFC 240.

And of course, the hot topic in her post fight press conference was her relationship with Dana. The Brazilian told the media that she felt like she had been bullied and that it had affected her family, as well as herself.

Speaking on The Ariel Helwani Show on Monday, Cyborg opened up even more about her relationship with Dana, insisting that if there’s any chance that she fights in the UFC again, he needs to apologise to her.

“Of course, he has to apologise. I think he has family, he has kids. I don’t know if he has a heart, but I think one thing he’s doing is not just touching me, because he doesn’t like me. He’s touching the people around me, he’s touching my family. It’s not right.”

The animosity between Cyborg and Dana goes back to 2014, before Cyborg signed with the UFC, when Dana told a media scrum that he had seen her at an MMA awards show and she looked like ‘Wanderlei Silva in a dress’.

And things got worse for Cyborg the following year when UFC commentator joked on his podcast that she had a ‘dick’. Something Cyborg hasn’t forgotten. Although Rogan apologised to Cyborg in private, he has never made a public apology.

After her fight at UFC 242, Cyborg and Dana were seen talking backstage. Cyborg opened up to Ariel what was said between the two.

“I look in his eyes and I shake his hand and I say, ‘Why are you lying? I texted your phone after the fight. I want my rematch.’ And then I said, ‘Why are you doing this?’ Why? He didn’t have words. There were a lot of cameras there, too.”

The 34 year old went on to discuss how distressing Dana and Joe’s comments have been on her and her family.

“I’m suffering bullying. Where is the code that you don’t do this? He is the boss. How does the boss make fun of your athlete? It’s a girl, say she has a penis, she’s a guy. You have to have rules. This is not right. I have a daughter, I have a mom, I have a dad. My daughter had a problem in school already because of this.”

Although incredibly unhappy with Dana right now, Cyborg said she could still fight in the UFC again, but it will take a serious conversation to get the relationship back on track. If it ever was on track.

To remind her fans of what Dana and Joe said about her in the past, Cyborg has posted a video of them speaking badly of her.

If Dana needs to apologise to Cyborg, if he wants to see the Cyborg vs Nunes rematch, I guess no one told the UFC boss. Following her win at UFC 242, Dana spoke to ESPN’s Brett Okamoto, where he changed his tune slightly from ‘Cyborg is afraid to fight Nunes again’ to ‘I think she would like some easier fights’.

“After watching her fight tonight and after her last fight, I don’t blame her for not wanting to fight Amanda Nunes. If that was Amanda Nunes in there tonight, you know…

“When you get to a certain age and a certain point of her career and you look like Cris tonight, if that was Amanda Nunes, it’s a whole different ballgame. I don’t blame her for that, I’m not criticising her for that, but these are facts. And the fact is, I will make the fight if she wants to fight Amanda. Amanda wants that fight.”

With Cyborg’s future in the UFC a real uncertainty, one man who has his eye on the situation, is Bellator president Scott Coker, who sent the former UFC featherweight champion a congratulations tweet after her win in Edmonton.

Where do you think we’ll see Cris Cyborg fight next?