UFC: Frankie Edgar Can’t Wait To Move Down To Bantamweight 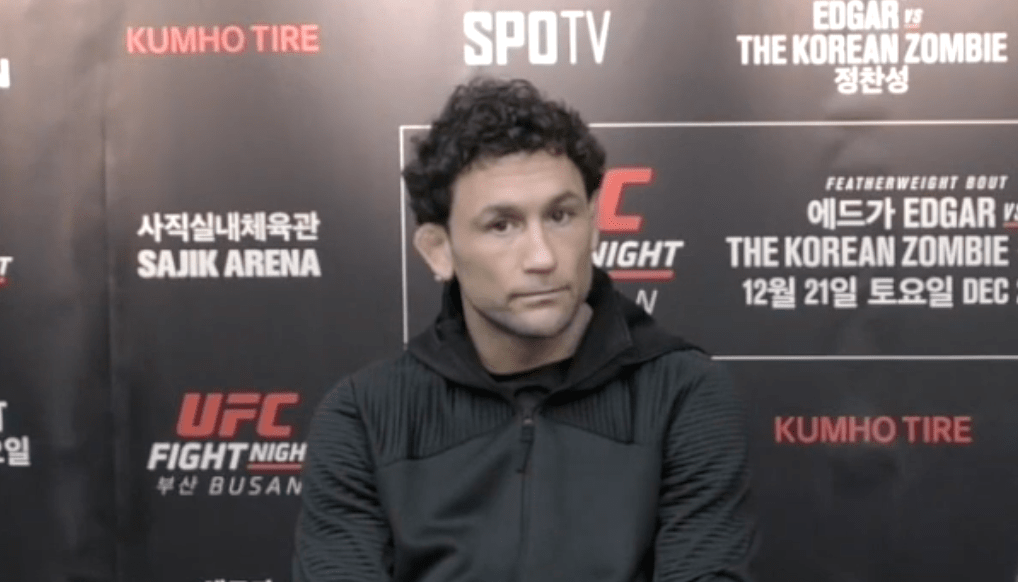 Edgar was scheduled to make his bantamweight debut against Cory Sandhagen in January, but was given another opportunity to get back into title contention at featherweight, when he replaced the injured Brian Ortega against ‘The Korean Zombie’ at UFC Busan.

Although Edgar suffered a first round TKO loss on the night, ‘The Answer’ still believes there is something to learn from every challenge that emerges. Speaking to MMA Fighting, the 38 year old said he doesn’t regret taking the fight on short notice.

“I took an opportunity. I don’t regret taking the opportunity looking back. It was a loss and that always sucks, because I can’t go back and change those things. I stacked the cards against myself more so than usual.

“I think what I learned was this next time around, I want to put the ball in my court and make sure it’s a comfortable situation for myself. Not going into the enemy’s territory, short notice and all of that stuff.”

With a division full of strong contenders, Frankie is focused on having his name heard at 135lbs.

“I don’t know who I’m going to get matched up with, but it will be someone along those lines [of Sandhagen],” Edgar said. “I wanted to fight in June before [the coronavirus pandemic] went down, and now I see that May 9th is tentatively scheduled. So we’ll see what happens there. But I’d like to get back in there [for June] ideally.”

After spending all of his career at lightweight and then featherweight, Edgar is now eager to enter a pool of new fighters for a third time. The thoughts of competing at bantamweight now, excites him.

“It’s cool because it’s another extension of my career. I spent half of my career at lightweight and the other half at 145, so I get a new set of toys to play with and a lot of new, interesting matchups.”

Ever since the spread of the coronavirus, Edgar has continued to train hard in an empty gym and in his basement at home. The 26-fight UFC veteran is eager to get back in the Octagon over the next few months, but isn’t ruling out accepting to fight sooner if the UFC offers him something interesting.

“Based on that last fight, I don’t really want to jump in anything on short notice,” he said. “I want to have a proper training camp to prepare. I’m always a game guy, and if the situation is tempting for myself, then of course I’ll think about it.

“I’m definitely not disregarding [what’s going on in the world]. Health and safety concerns will be heavily involved in my decision with the pandemic. But I’m an athlete, and this is what I’ve been doing my whole life, so that’s what I want to get back to regardless of what’s been going on.”

Although Edgar will be making a more strenuous weight cut to compete in the bantamweight division, he still believes that his discipline over the years, with 32 professional fights and a strong wrestling heredity, it won’t be a problem.

“It’s definitely not the ideal time to be worrying about weight with not having access to all the amenities and what not. When I decided this past summer that I was gonna go down to 135, I pretty much tricked my mind to not get over 160, and I’m pretty much there. I probably walk around around 157 without really trying hard so.

“I got my weight in the right place, so that when I have a date in mind, I’ll hook up with a nutritionist and get really zeroed in.”

How do you think we’ll see Frankie Edgar perform at bantamweight?