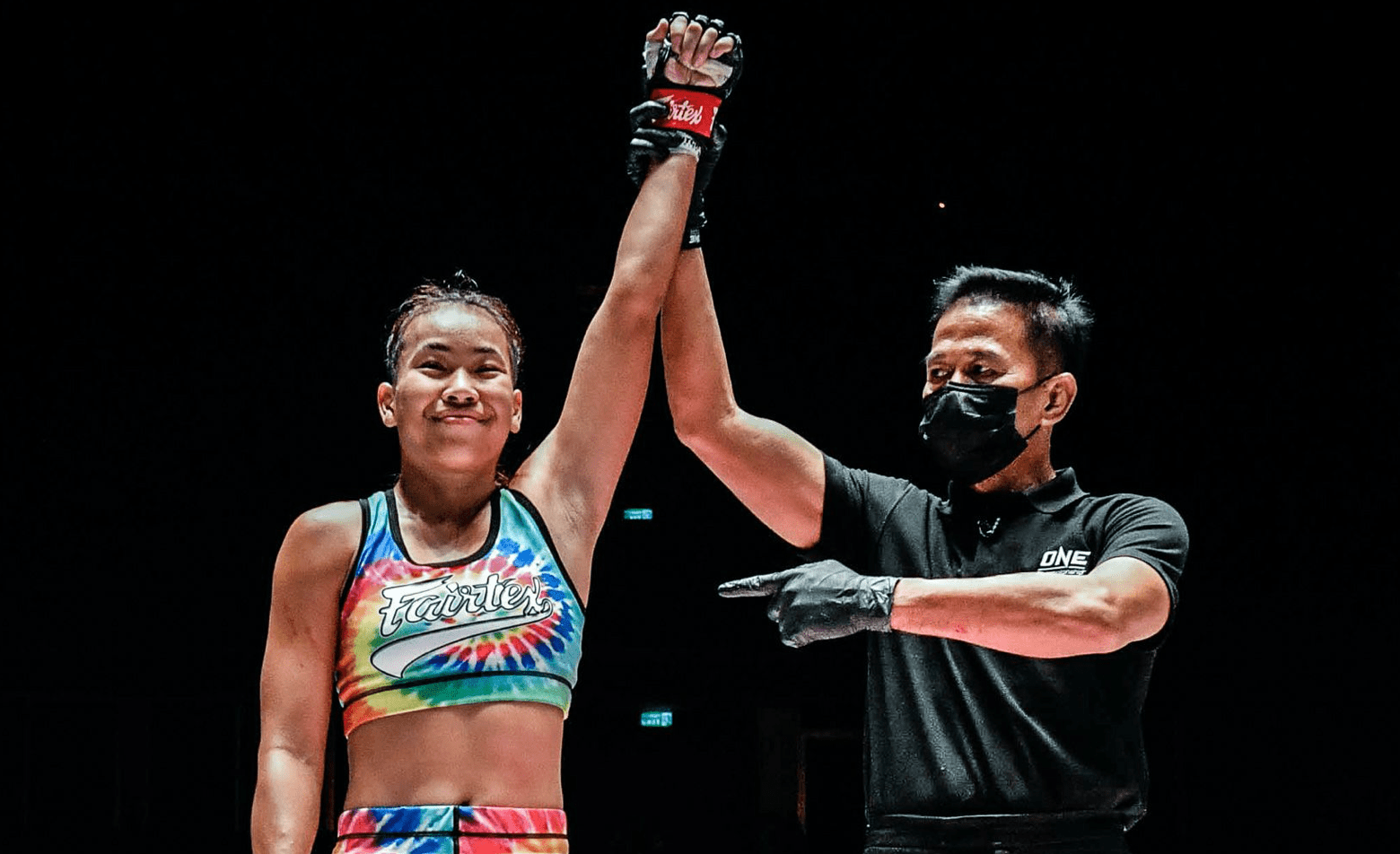 Wondergirl Fairtex has made a loud statement in ONE Championship these past couple of weeks. Her first two fights in the organisation both ended in stoppages. She quickly dispatched Brooke Farrell in less than two minutes of the first round at ONE: No Surrender 3. After saying she relied too much on boxing in her debut, Wondergirl promised to be more diverse in her next fight.

The 21-year-old made good on her promise to expand on her Muay Thai arsenal at ONE: A New Breed. Speaking exclusively to Asian Persuasion MMA, Wondergirl said elbows played a factor in her second victory, where she snagged the victory by TKO.

“I used my elbows very well. I practiced a lot of elbow things at Fairtex. All my [trainers] wanted me to use elbows. And I did it. But I still need to add more Muay Thai weapons when I fight.”

Wondergirl was apologetic for the manner of her victory over KC Carlos, which ended with a broken nose courtesy of an elbow to the face. The Fairtex representative also had high praise for her Filipino opponent’s overall performance.

“Her defence is very good. She blocked my punches very well, so I decided to find the loophole to punch through her guard. And she’s very smart. She goes clinching for defence.”

Her friend and teammate Stamp Fairtex fought in the main event, where she lost her ONE atomweight Muay Thai title to Allycia Araujo in a big upset. But Wondergirl believes the only way for the former two-sport world champion is up.

Only a few days removed from her second fight, fans of Wondergirl are already clamoring for a third fight. They have even named an opponent for her.

“I saw a lot of call outs. My fans want me to fight Amber Kitchen. If the border is open, I can fight anyone. It depends on Mr. Chatri [Sityodtong].

Other fans have also called for the phenom to move down a weight class to challenge for the Muay Thai world title. A title match between Wondergirl and Araujo would be interesting. Could she avenge her idol’s loss?

“I saw the comments. A lot of fans want me to fight at atomweight with the new champion, Allycia. I don’t know, I hope I can do that. I don’t think I can make the weight. Fifty-two [kilograms] is too much.”

Kickboxing And MMA As Well?

Like a growing number of Muay Thai fighters in the ONE Super Series, Wondergirl has also pondered the idea of trying kickboxing. However, she currently has no experience in the sport.

“Kickboxing is very new for me. I’ve never fought kickboxing before in my life. Never ever. But I do want to try it in ONE Championship. Also MMA too. I came to Fairtex because of MMA. I want to do MMA, that’s why I’m here.

“But I got a chance to fight in ONE Championship in ONE Super Series. So I took the chance. I hope I’ll fight MMA too. I want to know what I can do in the cage. It’ll be awesome. But now, I’ll still focused on Muay Thai.”

Her little sister Supergirl Jaroonsak, will also be making her promotional debut at ONE: A New Breed 2 against Milagros Lopez. The 16 year old is known for her dangerous knee spears, which have brought her much success in her Muay Thai career already. And Wondergirl can’t help but be excited for her sister.

“I feel so excited for her. She works so hard. She goes to school and then comes back for training. That’s a lot of work! She will put a great show for sure … She’s sixteen years old but she’s taller than me!”

As siblings, the two do find the time to train together, despite now training out of different camps. This proved to be effective during the coronavirus global pandemic.

“If I go back home, I’ll help her train together. Like clinching, sparring a little bit, like drilling. I used her to me by partner for BJJ too. With the COVID pandemic, I cannot train at Fairtex because all the gyms closed. But I can use her as my partner to drill some techniques. My coach sent me some techniques and I drill with her.”

Wondergirl also had some nice words to say about her dad, her not only taught the sisters Muay Thai and English, but also gave them their fighting names, Wondergirl and Supergirl.

“He was a Muay Thai fighter too, that’s why he can teach Muay Thai. And English … He teach us English. I should thank him, for all of this. He’s a good dad. He’s Super Dad.”

Who should Wondergirl Fairtex face next inside the ONE Circle?