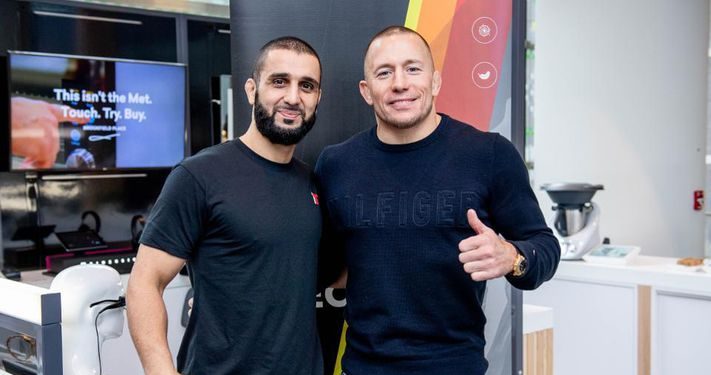 Ahead of Khabib Nurmagomedov’s UFC lightweight title defence against the interim champion Justin Gaethje at UFC 254, talk of a superfight with Georges St-Pierre continues to surround the Dagestani.

GSP, now 39-years-old, was last in action when he ended a four year hiatus to claim the middleweight crown against Michael Bisping at UFC 217 in 2017.

Since officially announcing his retirement in 2019, the Canadian superstar has refused to completely close the door on a possible return. Despite previously stating that he is content in retirement, last week GSP himself stated that he would consider a return if a catchweight could be agreed with Khabib.

Speaking to Sherdog (as transcribed by Bloody Elbow), St-Pierre’s longtime coach at Montreal’s Tristar Gym, Firas Zahabi, opened up on the chances of his star pupil coming out of retirement to face Khabib.

“Georges versus Khabib, I think, is the only fight Georges will come back for, to be honest with you,” Zahabi confessed. “I think it’s the only one, if Khabib… and I think we’re all expecting him to win his next fight. If he does it in decisive fashion, I think it will greatly increase the odds that he fights Georges in the future.

“If he loses, there would be no possibility, I think, in Georges’ mind. But if he has a great performance – which I think he will – I think that ups the chances greatly. Let’s just say that.”

When pressed on how likely we are to see the superfight, Zahabi said it was 50/50.

While Khabib will certainly have his hands full on October 24th at UFC 254, the odds of a win being rewarded with a superfight are seemingly in the books.

Do you think we’ll see Khabib Nurmagomedov and Georges St-Pierre face off inside the UFC Octagon in 2021?