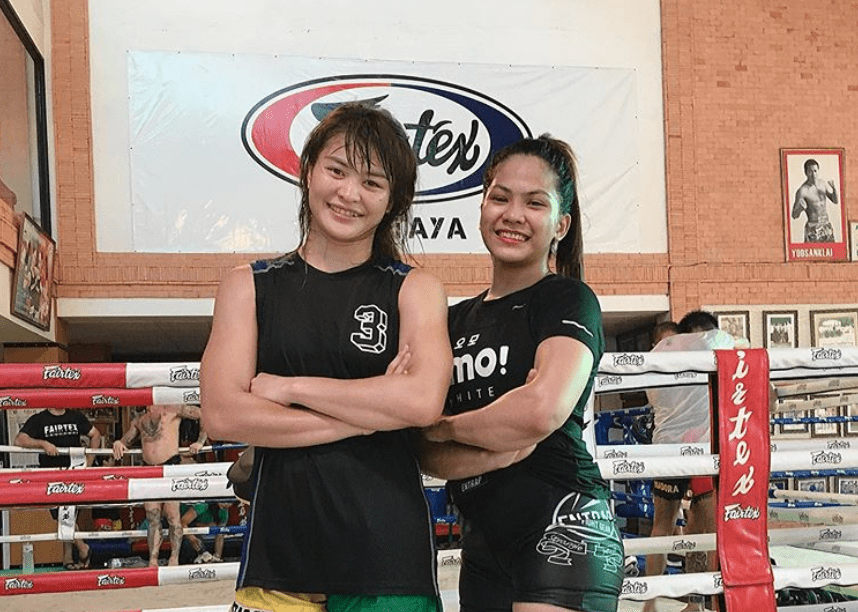 Thailand’s Stamp Fairtex burst onto ONE Championship scene, when she scored a head kick knockout after only 19 seconds against Rashi Shinde, in her mixed martial arts debut on Rich Franklin’s ONE Warrior Series.

Within a year, the 22 year old was the ONE atomweight Muay Thai and kickboxing world champion. But while she has since lost the kickboxing title to Janet Todd, Stamp has amassed three more wins in mixed martial arts.

Stamp’s mixed martial arts record now stands at 4-0, but despite the excitement surrounding her performances so far, the Rayong native believes that she still needs time before she’s ready to challenge the current champion, Angela Lee.

“It is still a long way for me. I’ll need to practice my ground game and learn more techniques to use in my next fight,” says Stamp.

But while Stamp may not feel ready, her best friend Denice Zamboanga does. After she dominated Mei Yamaguchi for three rounds at ONE: King Of The Jungle, to extend her professional career record to 7-0, it was confirmed that she will challenge Lee for the ONE atomweight title.

“In my opinion, Denice is a fantastic and well-rounded athlete – especially in striking, and showed she’s better than Mei. I look forward to seeing her fight for the title soon,” Stamp said about Denice.

Stamp and Denice both train at Fairtex Gym in Pattaya and often share social media posts of themselves training hard and showing off new dance moves. With both women holding strong title ambitions, Stamp insists that their friendship is strong enough to withstand the competition.

“I think it’s okay for both of us, because it means we are both the top athletes in this weight class who can compete with Angela Lee. I think Denice will be the right opponent [for Angela] having beaten Mei in her last fight. If she beats Angela, I would be proud of her, but if she loses, then no worries, I’ll get revenge for her.”

Stamp also believes that their bond could also overcome the prospect of having to face each other inside the ONE Circle, should it ever come to that.

“If one day me and Denice compete against each other, we both know that we’re going to try our best on stage, and once we’ve done our job, we’ll always remain best friends,” says Stamp.

As well as Stamp and Denice, there is also another young prospect in the ONE atomweight division, Itsuki Hirata. Since making her promotion debut last year, the 20 year old has impressed, winning three times inside the ONE Circle. Taking her professional record to 6-0, finishing all of her opponents.

Stamp has been impressed with her performances and likes the potential matchup with the Japanese star.

“Hirata is strong and the way she fights is actually like Denice. If I fight her it could be fun as our styles are very different.”

ONE Championship, like sports and sporting organisations all around the world is currently taking a hiatus as a result of the coronavirus pandemic. Stamp and Denice are both in isolation in Thailand, but still training.

Do you think we will see Stamp Fairtex or Denice Zamboanga dethrone Angela Lee in the upcoming years?