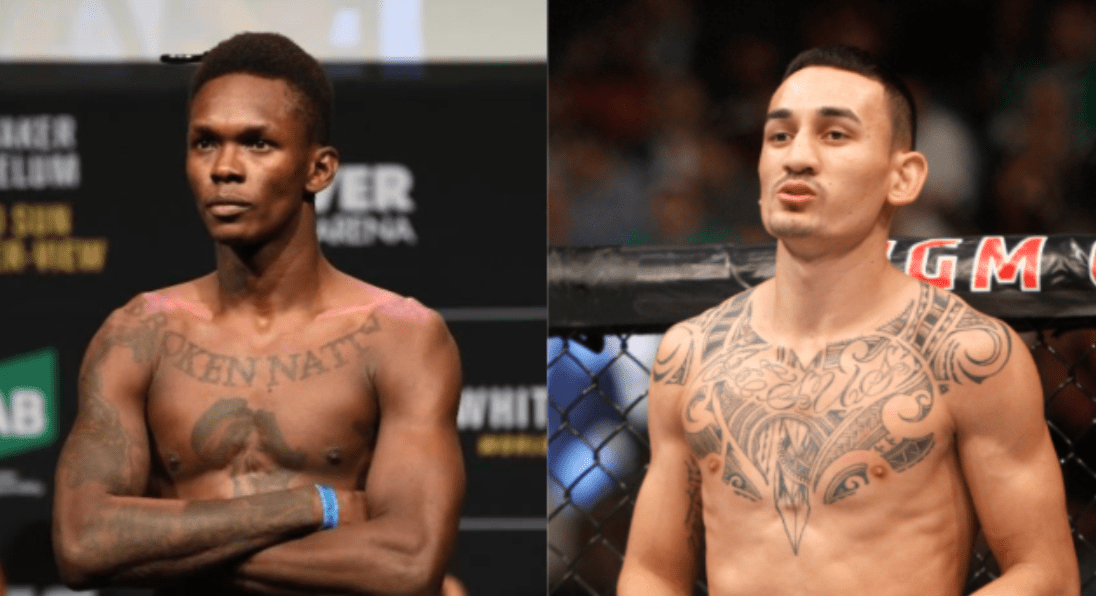 Much has been made of the scoring system used in MMA recently. Well, even more than usual. While many fans, pundits and fighters have been quick to point out some of the issues with the current MMA scoring system, solutions have been hard to come by. In part because there are no quick solutions. Israel Adesanya and Max Holloway are two fighters however, who are trying to be proactive.

One of many criticisms is that fact that the current MMA scoring system is based on the one used in boxing. Speaking to theScore, Adesanya said that if MMA is going to use the boxing ten point must system, it needs to be adapted.

“F***ing use the point system. Here are ten points to use right? If a guy gets worked for f***ing five minutes completely and survives, that’s a 10-3. Like, don’t [score it] 10-8 or 10-7. Nah, make that a 10-4 or 10-3. Use the whole spectrum of the judging system. This isn’t boxing or kickboxing or whatever, this is MMA. There’s much more to the fight than being on bottom or being on top or walking forward.”

And it’s not only the boxing scoring system that has been criticised, the fact that boxing judges are judging MMA fights is far from ideal. As Adesanya points out.

Another possible solution to the ten point must scoring system is to take a leaf out of ONE Championship’s book and score the fight as a whole. An additional advantage of this is that it stops fighters from attempting to tactically win rounds, but instead encourages them to look to dominate and finish the fight at all times.

Another potential solution is open scoring, where you show how the judges have scored each round, between rounds. In the wake of some of the controversial scoring at UFC 247 last month, the Kansas Athletic Commission announced that they will experiment with open scoring from last Sunday, March 1st.

Invicta FC will be the first promotion to try the open scoring in Kansas for its Phoenix Series 3 card, on March 6th in Kansas City. And former UFC featherweight champion Max Holloway has taken to social media to say that he will be in attendance to see how it plays out on the night.

“Seems like every fight week we got issues with fights going to decisions. I’ve met many judges. Most of them are good people just trying to do the right thing. I’m sure there’s a bad guy here and there like any job but our problem is not the people judging… what about the system? Are we putting these judges in a position to do the best job possible? We can’t just keep bashing judges and I realize that now. Nobody good is going to want to do the job.

Open scoring has been tested in boxing. Cool. MMA isn’t boxing my friends. We don’t know for sure how it will work in MMA. And if it creates more problems than it fixes at least we finally have proof and can move on to the next idea. But maybe it works. Or maybe it creates new problems but we can fix those with new scoring and rules. I don’t know but nobody does. And that’s why we have to put down the bag of Cheetos now and do the work.

Mahalo to Kansas Athletic Commission, @invictafc , and all the athletes competing with open scoring for the first time on March 6. This sport started with men and now we have women putting their bodies and careers on the line to test an idea to keep pushing our sport forward. How badass is that? For any other commissions and regional promotions testing new ideas to help our sport let me know. Open scoring is just one idea that’s easy to test. Many other ideas to test especially for how we score matches… I’m flying in to support and I’ll be handing out as much free merch as my team can bring from Hawaii”

Of course, knowing how a fight is being scored in real time isn’t going to help the overall scoring issue. For example, if at least one of the judges is incompetent, it will just mean that you know that there’s an issue between rounds and not after the fight.

One other possible problem with open scoring is that if a fighter knows he is up on the judges’ scorecards going into the final round, they could just play it safe. So it will be interesting to see how it plays out at Invicta FC: Phoenix Series 3, which you can watch live on UFC Fight Pass.

Some of the other solutions that are often thrown out there include employing ex-fighters as judges, but then some argue that they could be biased and they’re not exactly lining up to become judges, and having more than three judges. Verdict MMA have brilliantly taken this one step further and created a global platform for real-time judging.

Last month, Severe MMA’s Sean Sheehan posted a great video explaining that a large part of the problem is not the MMA scoring system itself but fighters, pundits, fans and suchlike, not understanding the actual scoring system and the judging criteria.

But whilst this is a very good point, it would be a little foolish to assume that the system is perfect. If judges are scoring fights as they should be according to the Unified Rules of Mixed Martial Arts, then how are we getting judges’ scorecards looking so different at times? We have to assume that all judges are familiar with the rules.

There is obviously the issue of different commissions using different sets of rules. Even in the most up-to-date Unified Rules of Mixed Martial Arts, where 10-8 rounds are more prominent, there is too much variance in a 10-9 round. You can win a round 10-9 by the tiniest of margins, or you can win a 10-9 round fairly comfortably. Over three or five rounds, that could make a big difference.

Personally, I’m a little skeptical about the open scoring. Although I could be proved wrong. And as Holloway stated, it’s good to experiment. Outside of that, I would like to see most of the suggestions above implemented in some way. I think we need to move away from the boxing scoring syatem, have more than three judges and as Sean Sheehan did so well, educate the masses how exactly the MMA scoring system works.

What changes do you think would improve the scoring system in MMA?