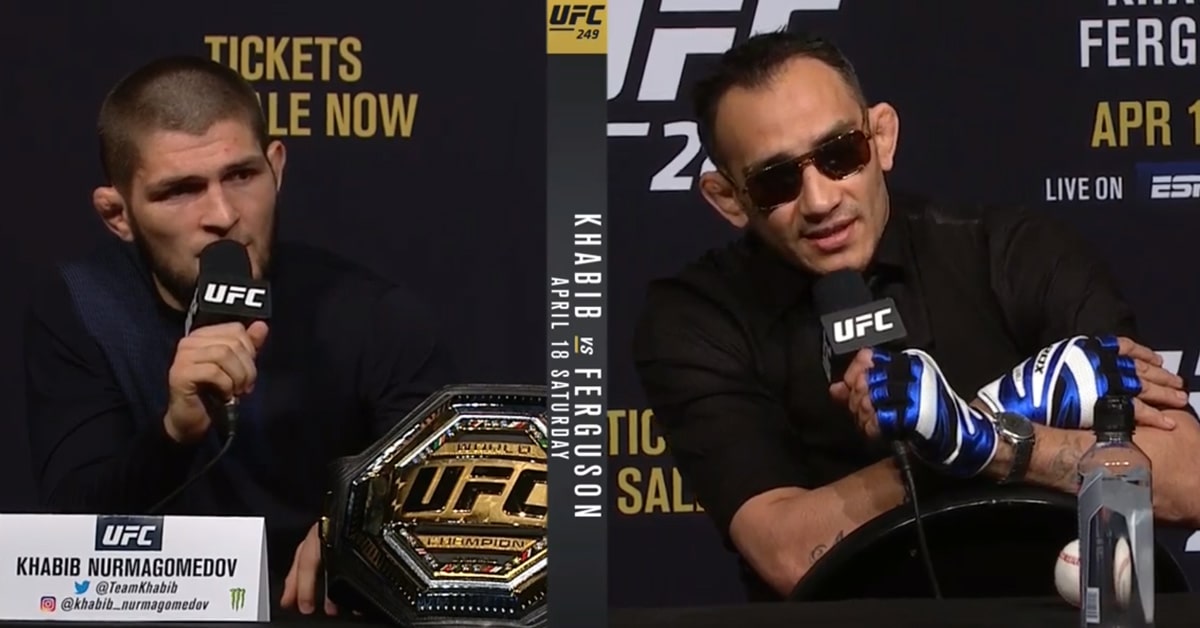 It’s August 21th, 2015, surging prospect Khabib Nurmagomedov is told that he will be facing the poles apart Tony Ferguson at the Ultimate Fighter 22 finale in December. But come fight night, it was not the Dagestani who stood inside the Octagon. Instead, it was Edson Barboza who faced ‘El Cucuy’. The then 27 year old broke his rib in training, six weeks out from the fight. This was the first time that the greatest lightweight bout eluded us.

Over the next three years the bout was scheduled a further three more times, but each time the fight didn’t come to fruition. Then at the end of 2019, UFC president Dana White announced that the fight had been booked for a fifth time, to main event UFC 249.

People thought that the fifth time was the charm, that the most highly anticipated lightweight bout of all time was finally going to happen. But this now looks extremely unlikely to happen on April 18th, following Khabib’s recent statements suggests otherwise.

The history of the bout is well documented and their differences are often spoken about, but something that is overlooked is the similarities between the two fighters. Let’s take a look at what makes this fight so unique.

1: Both Have The Same Number Of Pro Fights

To start Khabib is 28-0 and Ferguson is 25-3, which means both men have had the same amount of pro fights even though ‘El Cucuy’ is 4 years elder to Nurmagomedov.

As he came from a sporting family, Khabib was exposed and excelled in sports from an early stage. This helped him to kick start his MMA career at a young age.

As for Tony, he took a very ‘Rocky’ type of road to his MMA career. As the story goes, Ferguson was a bartender when a patron of his bar invited him to teach wrestling to some new MMA fighters. A NCWA wrestling champion, ‘El Cucuy’ took the opportunity and soon after, decided he that he also wanted to get into Professional MMA. The rest is history.

Fun fact: Both fighters started their pro careers in 2008.

Both Khabib and Tony are riding a 12 fight win streak in the UFC. And if they manage to keep that winning streak intact, they will be the first two fighters in the promotion’s history to head into title fight with such accolade.

3: Both Have Been The Favourite In All Of Their Fights, Except For Two

In all his fights Khabib has been the favourite, except for the two. In the Gleison Tibau fight, he was a +135 underdog and Kamal Shalorus fight he was a +100 underdog.

Ferguson, on the other hand, was an underdog in his fight against Ramsey Nijem and was also an underdog going into the Khabib fight at UFC 249.

4: Both Have Only Been In Three Five Round Fights And Only One Went The Distance

Out of his 12 UFC fights, Khabib has only been in three five round fights. And only the Al Iaquinta went the distance.

Ferguson has been in 16 UFC fights and only three of them were five round fights. Out of the three, only the Rafael dos Anjos fight went the distance.

5: There Are Five fighters That Have Faced Both Of Them

Both Khabib and Tony have faced the following fighters throughout their career,

Khabib managed to beat all five fighters, while Tony managed to defeat four of them. Ferguson’s decision loss to Michael Johnson is the only defeat he has had in his UFC tenure.

Khabib scored unanimous decision victories against four of the five. He beat Michael Johnson with a 3rd round Kimura. Tony on the other hand, went the distance with RDA and finished Trujillo, Tibau and Barboza.

These are few similarities we found between Khabib Nurmagomedov and Tony Ferguson. Do you know any other ones?