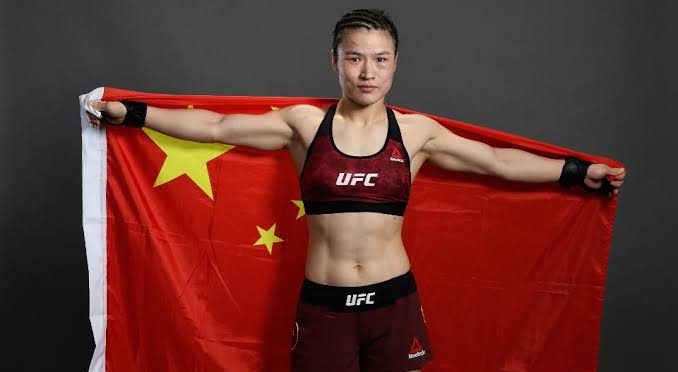 When Joanna Jedrzejczyk won her fight at UFC Tampa, she immediately said her next fight would be for the strawweight title. Not too long ago, Joanna admitted that she turned down fights with Weili Zhang thrice in the past. And now, the tables have turned, and the new strawweight queen is the one calling the shots.

Zhang (20-1 MMA, 4-0 UFC) won the strawweight title from Jessica Andrade at UFC Shenzen earlier this year. And after being snubbed by “Joanna Violence” in the past, Weili doesn’t think she deserves to fight for the championship.

Speaking with TMZ, Zhang discussed about possibly being the bridge to connect China with the United States. When asked about fighting Jedrzejczyk, Zhang said she doesn’t believe Joanna has earned her opportunity.

“Joanna… I don’t think she’s the fighter she used to be”, Zhang told the website. “She’s not in the condition she used to be [in]. I’m not very interested.”

Zhang also hasn’t forgotten that Joanna turned down the opportunity to fight her, and previously said Weili needed her more back then. Now, the champion has fired back, saying the former strawweight queen needs her. Furthermore, the Chinese fighter also named Rose Namajunas as someone she would want to fight next.

“Definitely, she needs me more than I need her, and she’s struggling in the division to fight me. But I don’t know if I will give her the chance. I want to fight the best. I think maybe Rose [Namajunas] is also a good choice.”

Weili also admitted that a fight with flyweight champion Shevchenko would interest her. And she isn’t averse to moving up a weight class to fight ‘Bullet’ in her own division.

“If I had the chance, I’d like to move up to the weight class and fight the best, and right now Valentina is one of the best”, Zhang concluded.