Alex Volkanovski And Max Holloway Trade Blows Ahead Of UFC 251 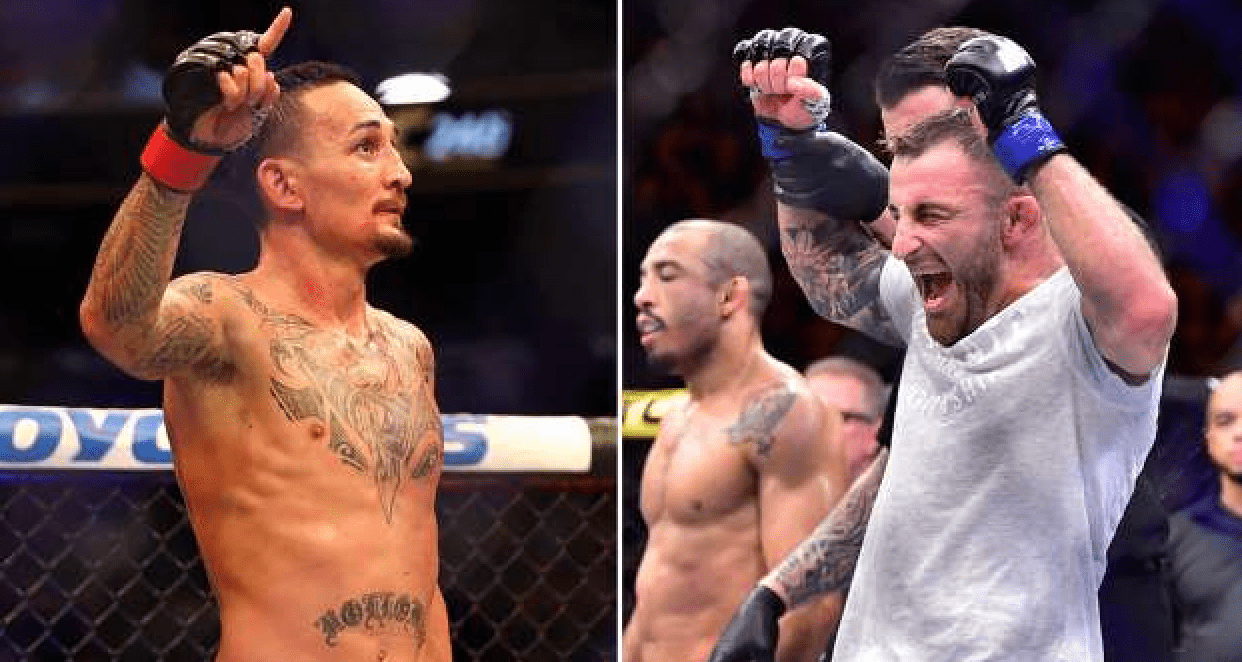 Alex Volkanovski and Max Holloway are set to rematch for the title as the co-main event on July 11th at UFC 251. This will be the Aussie’s first attempt to defend the belt, while ‘Blessed’ will try to regain his position as the featherweight king.

Despite the good-natured relationship between the two leading up to their first bout, both seem to have a more unfavorable opinion of each other this time around.

Speaking to the media this week on Fight Island (as transcribed by MMA Fighting) both men opened up on their thoughts on their opponent’s attitude before the fight. Volkanovski initiated the exchange by criticising Holloway’s demeanour after losing the belt at UFC 245.

“Look, I don’t know if he’s playing the game and he’s just trying to get people to believe the s*** he’s saying, I don’t know what it is,” Volkanovski said. “I’m not letting it get to me. It seems like it’s getting to him. It seems like he’s salty and he’s being a bit of a sore loser, but I guess losing is tough and maybe that’s why he’s acting like that. He’s saying some crazy things.”

Despite maintaining respect for his opponent, Volkanovski does find Holloway’s latest claim to be out of character. Although no bad blood between the two has been reported before, the 31 year old believes that his rival’s claims have been nothing but hostile since their first title bout.

“There’s something different about the way he is,” Volkanovski said. “I don’t know what it is. Again, I don’t hate the guy. I’ve got respect for the guy and you can see clearly after my fight I was saying he was a great champion and I want to be a great champion too. That’s how I know Max Holloway. To see him say these things and act the way he’s acting, it just doesn’t suit him. It’s not how he should be going about it. I don’t know why he’s taking it that way. I’m blown away by it, but at the same time it makes me want to put a bit more of a beating on him as well, so again, I can use this as fuel. He’s saying the wrong things and—whatever, it is odd.

“I don’t know where he’s going with all these weird narratives, like, ‘the leg kicks weren’t working,’ he was saying that the commentary was biased for me. It was crazy, acting like I’m a karate point-puncher when he’s known for his volume punching, pitter-patter. You had the commentary talking about how I’m looking to throw power shots to finish the fight. Am I going to be able to keep this pace up and keep this power up, am I going to gas because I’m throwing everything into my punches. You know what I mean? It’s just crazy where he’s going with everything.”

The champion also responded to those stating that he asked for the Holloway rematch, something most fighters would not do straight after winning the belt. Volkanovski stated that the rematch was the UFC’s only proposal and that beating the Hawaiian again would make a statement in the division.

“The UFC never brought anyone but Max Holloway,” Volkanovski said. “Max is telling everyone I was asking for the fight, but that’s just what the UFC were asking for. At the end of the day, if that was the fight they were gonna push on me, and there were no clear number one contenders, it ended up being the fight I wanted anyway.

“The biggest fight in my division is Max, there’s no clear No. 1 contender, so a rematch against Max—obviously, he’s still in his prime. You take out one of the greatest of all-time, you know a lot of people throwing his name out there as the GOAT, and to take him out back-to-back, that’s saying something.”

Holloway didn’t shy away from speaking his mind about his opponent either. ‘Blessed’ stated that he finds Volkanovski’s hostile attitude more suitable for a challenger than for champion.

“How is he talking? Is he talking like a champion? “ Holloway said. “At the end of the day, I feel like he’s attacking me. He called me out to fight. That’s something a challenger does, doesn’t it? I don’t know.

The 28 year old is confident in his skills and believes that Volkanovski’s interviews reflect the Australian’s poor change in attitude since becoming champion.

“I knew I was the champ,” Holloway said. “There’s certain things like the belt, it was just for people to understand where I was coming from.

“At the end of the day, his interviews speak for themselves. You guys can go look and tell me any different.”

What holds true is that both athletes will face each other on the Octagon for the UFC featherweight strap this weekend on the first card taking place on Fight Island. Fans can rest assured that this contest will be one to remember between two of the division’s elites.

Who do you think the winner will be in the UFC 251 co-main event between Alex Volkanovski and Max Holloway?