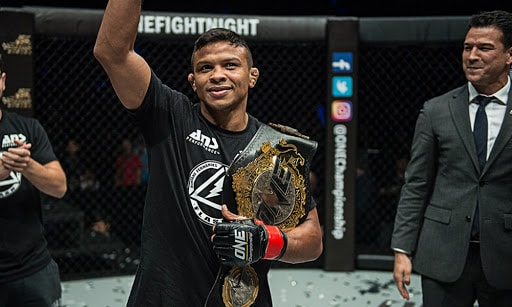 ONE Championship bantamweight title-holder Bibiano Fernandes is ready to enter the next stage of his career. In an interesting and almost unprecedented piece of MMA history, the 40 year old fought the same opponent for three straight matchups. But after submitting Kevin Belingon at ONE: Century last October and effectively ending their longstanding rivalry, ‘The Flash’ is ready to find a new opponent.

Speculation arose recently that the Brazilian-born and Vancouver-based Fernandes might be named as a future opponent for his good friend, Demetrious ‘Mighty Mouse’ Johnson. But ‘The Flash’ quickly put these rumours to bed.

Speaking with MMA Fighting, Fernandes had two names in mind: Shoko Sato, a bantamweight champion in his own right under Shooto; and John Lineker, the heavy-handed knockout artist freshly imported from the UFC.

“They can give it to either one of those two,” Fernandes suggested. “I’m waiting to see who that is. I’ll study and prepare to face whoever they want. It can be one of those two.”

The former option will interest fans in that it unifies to some degree the bantamweight title now that ONE Championship and Shooto have joined forces. The latter, however, seems slightly more likely, given the name recognition Lineker has achieved following his UFC career.

“So, yeah, that’s better – fighting him might be way better,” Fernandes noted of a potential match-up with Lineker. “It would be a good fight because of his name, because he used to fight in the UFC.”

Though he is perhaps best known for his amazing grappling skills, Fernandes also shows no sign of fear when the question of exchanging with ‘Hands of Stone’ arose. Indeed, Lineker has a short reach and a tendency to throw looping punches, which may land him in trouble against ‘The Flash.’

“I’d rather have my fighting style,” Fernandes commented. “Come in, be aggressive, get the takedown. Hit and get hit. I mix it up a lot more. That’s why I’ll probably fight for more time.”

Of course, the matchup will not be scheduled presently due to ongoing uncertainty related to the COVID-19 pandemic. In fact, Fernandes is reportedly still in Canada and awaiting firmer plans prior to arranging a fight camp in preparation of his next title defence.

“My return is entirely up to ONE Championship,” he explained. “I have no idea when they plan on doing a show. I need at least seven, eight weeks to prepare for a fight. I’m staying fit, training jiu-jitsu, Muay Thai and wrestling.”

Who do you think Bibiano Fernandes should fight next inside the ONE Circle?