Dana White: 2020 A Tough But Successful Year For The UFC 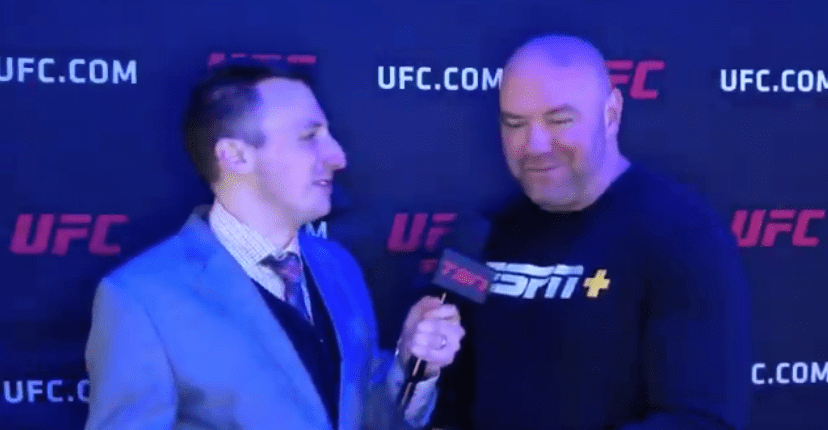 With the coronavirus nearly halting the daily routines of people from all over the world, 2020 has truly been a tough year. But for the UFC, the year has been very successful, despite the hurdles. Speaking to TSN’s Aaron Bronsteter, UFC president Dana White talked about the promotion’s activities amid COVID-19, and Anthony Johnson’s deal with Bellator, among other topics.

In order to keep the show running as usual in truly abnormal times, the UFC has made a great amount of effort, with the promotion spending $17 million to conduct a total of 26,300 COVID-19 tests, with a positivity rate of 0.8%.

“It was a very challenging year for us. You know, to pull all this stuff off. It was without a doubt the hardest year of my career,” Dana said. “We have spent $17 million on COVID testing this year. 1470 UFC athletes, cornermen, and staff were transported through 1700 commercial and 34 charter flights.”

Despite the tough circumstances during this year, the UFC has made it a success in terms of finances and marketing. Dana said the promotion has broken every record, except for one.

“We’re up 30 percent on ESPN,” Dana stated. “Then, as soon as it starts to average out, we’re up 18-20 percent this year … Our social media growth was massive this year. We surpassed 10 million followers on YouTube, earning us diamond status. Second only to the NBA among sports organisations worldwide. Our Instagram growth in the US went up 38.17 percent. We’re number two, only to the NBA again … And the Joaquin Buckley thing was massive and broke all kinds of records. We broke every record we had except for live gate. Consumer products was up 166% this year. The list goes on and on. We killed it this year, it was an amazing year for us.”

When asked to estimate how much the promotion is worth now, Dana suggested in the region of $9 to $10 billion.

Former two division UFC champion Conor McGregor is scheduled to fight Dustin Poirier at UFC 257 next month. When asked if a fight between Justin Gaethje and Michael Chandler could possibly serve as a backup, Dana seemed open to the idea.

“It could be,” Dana said. “Listen, if we are going to be out in Fight Island and you have a massive fight with McGregor, you have to have a backup.”

Earlier this week, Anthony Johnson parted ways with the UFC to sign with Bellator. Dana said that he has a great relationship with him, and he would have loved to see ‘Rumble’ continue to compete in the UFC.

“First of all, I have a good relationship with Anthony Johnson,” Dana said. “I like him very much. He was under contract with us. I would have loved to see him and compete here. I don’t know. Use your imagination … I have a great relationship with him, I love the kid.”

But the UFC president refused to comment on why Johnson left the UFC for Bellator.

One would think that being the president of the UFC, Dana would keep a keen eye on his competitors, including Bellator. However, the promotion’s spearhead said there is nothing interesting about the rival promotion.

“Really, if you look at Bellator, there’s not much to be interested in,” Dana said. “There’s much better promotions all over the world that are actually dealing in up-and-coming talent. There’s lots of great shows to watch all over the world. All you (the media) talk about are two, when there are plenty of other places.

“It’s like everybody keeps asking me about these fights that are going on, whether it’s the YouTube kids or other kids, and all this other stuff. There’s a market for that.

“People want to see that, people are going to make money, there’s a market for that, it’s the same thing with Bellator and those other places. That’s not what I do. I’m looking for the up-and-coming best fighters in the world. And I’m looking for people that I believe could possibly someday be world champions. Those are the people we’re looking for.”

During the interview, Dana White also confirmed that he plans to meet Khabib Nurmagomedov next month in Abu Dhabi, that the welterweight clash between Leon Edwards and Khamzat Chimaev is likely to be rescheduled to main event the UFC’s January 20th card on Fight Island, and that if there was one fight he would love to see in 2021, it would be Jon Jones vs Israel Adesanya.