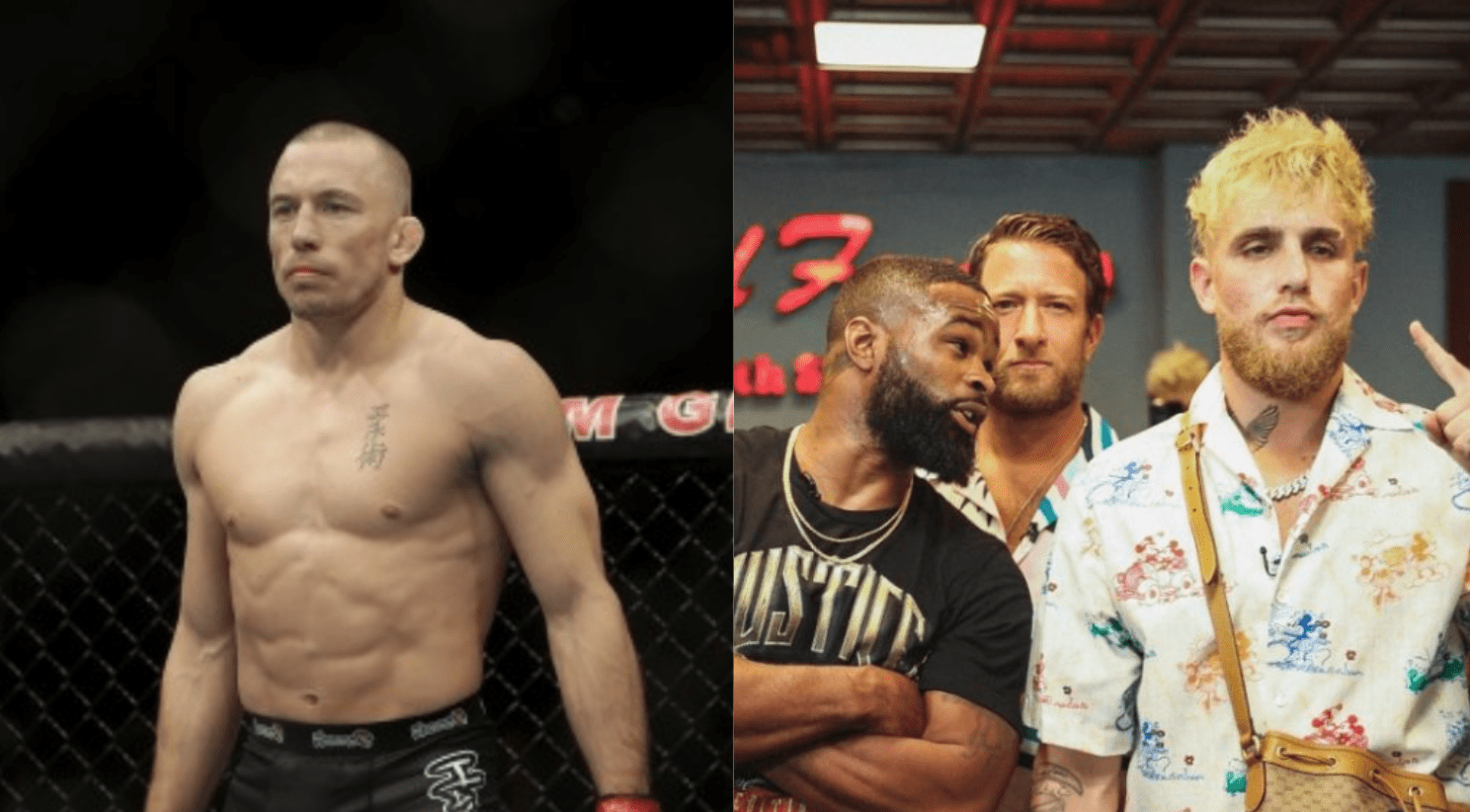 Paul is coming off a spectacular first-round stoppage win over former Bellator and ONE Championship titleholder Ben Askren in April, and is now set to headline Showtime’s August 28th event against Woodley in Miami.

Like Askren spent part of his training camp with renowned boxing coach Freddie Roach before his fight with Paul, Woodley is also spending part of his camp with one of the greatest minds in the sport, as he currently training with Floyd Mayweather.

After the MMA community were left disappointed by the Paul vs Askren result, they have more faith in Woodley’s chances come fight night. While the 39 year old also came from a wrestling background, he showed knockout power inside the Octagon. ‘The ‘Chosen One’ has predicted that he will knock ‘The Problem Child’ out, but St-Pierre sees things differently.

Speaking on Tristar Gym’s YouTube channel (as transcribed by MMA Fighting), St-Pierre said that although he doesn’t want to predict an outcome just yet, he thinks Paul can definitely beat Woodley.

“He could, definitely,” St-Pierre said. “It’s a different sport. In MMA I would say no, but in boxing he’s much bigger than Tyron Woodley, and also he trains very hard. I’m not saying that’s what’s going to happen, but I think he definitely can do it. I’m not one of the haters, and [Paul] actually is a very nice guy.”

Despite the fact that Woodley has been competing at the highest level for over a decade now, Paul is a slight betting favourite ahead of their boxing match. This isn’t a surprise to St-Pierre however, as ‘T-Wood’ is crossing over from MMA to boxing.

“It’s a different sport,” St-Pierre said. “When I was training when I was world champion, I was boxing with some great amateur boxers that, they were not world-class amateurs but they were great amateur boxers, and it was good training. It’s a completely different sport, and just to put that into perspective, I believe if you would allow dirty boxing in boxing, you would have a total different set of champions. Because you change a rule, you change the game. Woodley has more experience in combat sports than Jake Paul, but it’s a different game. It’s interesting. As a fan, I’m going to watch it for sure.”

St-Pierre also said that he expected Paul to beat Askren, after he heard that ‘Funky’ wasn’t doing great at Wild Card Boxing.

“I knew because I know people that were training at the same gym as [Paul],” St-Pierre said. “And they told me that he was training very hard. And I know that Ben Askren, because I know Freddie Roach, only went for a week to Freddie Roach’s and he was not doing great.”

Do you agree with Georges St-Pierre’s assessment of the upcoming Jake Paul vs Tyron Woodley boxing showdown?