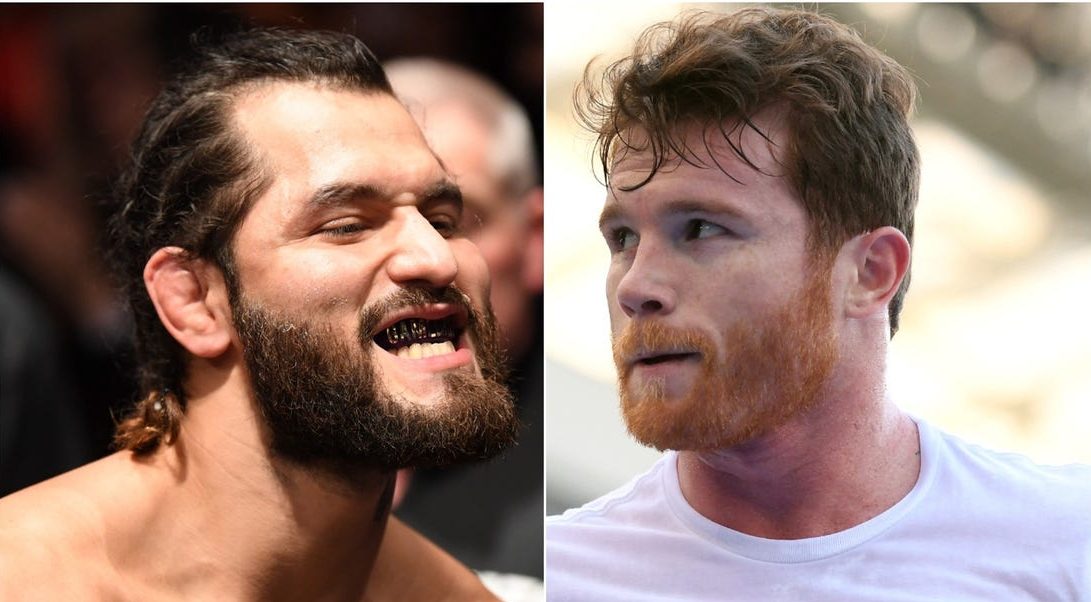 Jorge Masvidal has his sights set on UFC welterweight champion Kamaru Usman, but isn’t ruling out a super fight with Canelo Alvarez in the boxing ring down the road.

Masvidal was ringside for Canelo’s fight with Avni Yildrim this past weekend, offering his duties as a Spanish colour commentator for ESPN’s Latin America broadcast. The pound-for-pound boxing king blasted his way through his Turkish counterpart on the night, making him quit on the stool in between the third and fourth round to retain his WBA (super), WBC and The Ring super middleweight titles.

Speaking to IFL TV (as transcribed by MMA Mania) after the event, Masvidal said that Canelo is the best boxer in the world right now, by a decent margin.

“I love to see the disparity, the great vast difference between the number one and everybody else,” Masvidal said. “Truly, Canelo is the pound-for-pound guy right now. Offence is looking insane. The defence looks great. And the way he’s getting his timing and distance? Ridiculous. I knew it was going to be a blowout, but I didn’t think it was going to be like that.

“After round one he was just potshotting him to death. It was just interesting to see what he can do to a number one contender so easily. Brings up the question: who can challenge this dude at 165 pounds? Because I truly feel it’s his weight right here. I don’t see nobody at 165.”

Masvidal has talked about his love for boxing throughout his MMA career, and has called out both Canelo and Floyd Mayweather in the last couple of years. ‘Gamebred’ said that it would be a dream come true compete in the boxing ring.

“Definitely a dream,” Jorge expressed. “My first love is boxing and I still love it to this day. If a champion in MMA can come over and challenge a champion in boxing? For me, it’s more than a dream, it’s a fulfillment. I first fell in love with boxing before UFC, started boxing before I even saw the UFC, so it’d be just full circle amazingness.”

Should he ever get the opportunity to compete against Canelo, Masvidal acknowledges that he would be a big underdog, but guarantees he will put up a fight against him.

“He’s one hell of a boxer, my brother,” Masvidal said. “Chances are limited, but I’m a dog in every fight I’m in.”

In a different interview with Boxing Social, Masvidal claimed that a title fight between himself and Usman is set to go down in September, and while he would love to transition into boxing, he’s focused on the UFC gold for now.

“[The Usman fight] is what I’m worried about now,” Masvidal said. “Whatever the future holds … I can get into boxing. I love boxing and boxing gives out the big paycheques. Boxing pays more for the pay-per-views we’re bringing in than my current sport. So would I love to be in boxing? No brainer. Yes. When the time comes we’ll cross that bridge, get the right opponents.

“But I’m here as a fan, I wasn’t here to call out Canelo or anything like that, I love what he does out there, I love boxing. It’s simple, you know?”

Usman’s manager Ali Abdelaziz has however dismissed Masvidal’s claim that the champion is set to defend his title against the Miami native in September.

A boxing bout between Jake Paul and Ben Askren is set to take place on April 17th. The YouTube star has moved to Miami to focus on his boxing career, and has been training with several professional fighters, including Masvidal, who picks him to beat ‘Funky’.

“Straight boxing, I gotta go with Jake,” Masvidal stated. “I just don’t think Ben has the hands. I love my MMA brothers and sisters but I don’t see Ben pulling this one off.”

Would you be interested in a boxing bout between Jorge Masvidal and Canelo Alvarez?