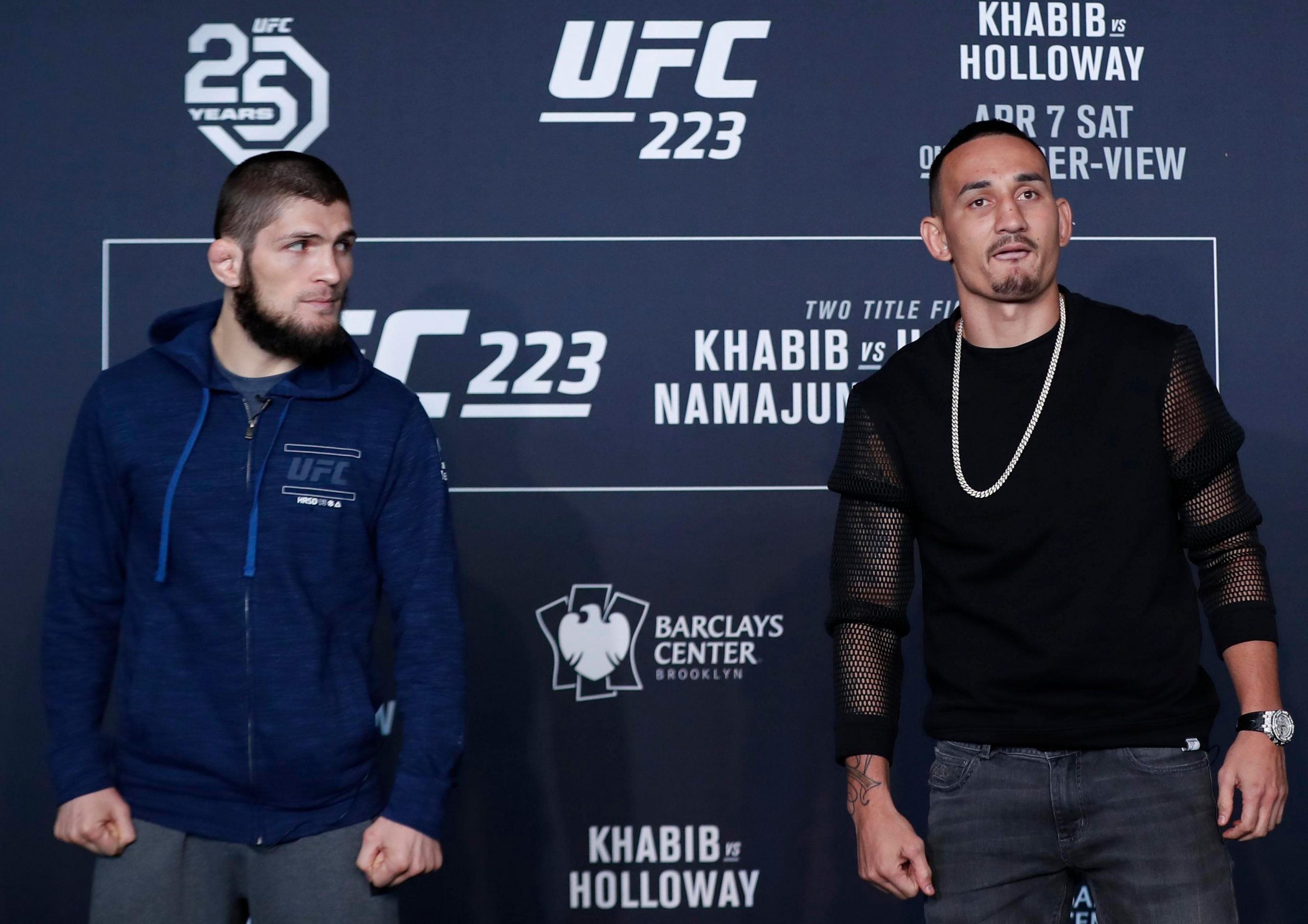 Max Holloway is still disappointed that he missed out on the opportunity to fight Khabib Nurmagomedov for the lightweight title three years ago at UFC 223.

Khabib was originally scheduled to fight Tony Ferguson for the belt at UFC 223, but ‘El Cucuy’ had to pull out one week ahead of the fight after seriously injuring his knee by tripping over some cables whilst on media duties. As a result, Holloway stepped in on one week’s notice to face ‘The Eagle’ in the main event, but just hours before the weigh-ins, the New York State Athletic Commission declared the then featherweight champion medically unfit to compete.

Khabib eventually went on to fight last minute replacement Al Iaquinta, and dominated him for five rounds to become the new UFC lightweight king. The 32 remains the champion today, despite announcing his retirement following his latest title defence against Justin Gaethje at UFC 254.

Speaking on The Joe Rogan Experience podcast (as transcribed by Bloody Elbow), Holloway recalled the problems he had to deal with during the UFC 223 fight week.

“[Nutritionist George] Lockhart took me on for the fight,” Holloway said. “We called him, we had a talk, and then he did a freaking interview talking about ‘This is the biggest cut we’re ever gonna do…’

“And then the first thing that happened when I land, a f***ing meeting with the f***ing… not even with the UFC doctor, a doctor from the New York Commission. And then they tell me [that] every single f***ing day, they’re gonna check up on us. And I was like, ‘Holy shit, what the hell?’ And I was fine. I was a little bit bigger than I usually was.”

Holloway revealed that he was only a few pounds short of the 155lbs limit a few hours before the weigh-ins, when a NYSAC representative decided to pull him from the proposed main event on medical grounds.

“I’m like four pounds away from making the weight. I’m going like, ‘It’s tough, but I’m gonna get there. I know I’m gonna get there,’” Holloway recalled. “And then they come in and they check, and we have, like, hours left before weigh-ins.

“They come in, they check, they looked at me and they said, ‘You don’t look good. You can’t do it.’ That’s all that happened. And they walked out. I wasn’t fighting. I was like,’ What do you mean?’ He was like, ‘You look skinny.’ I was like, ‘Coming down, losing weight, I’m pretty sure I’m not gonna look like how I first met you on f***ing Monday. What is going on?’”

‘Blessed’ was obviously hugely disappointed to be pulled out from his fight with Khabib, in part because he wanted to test himself against one of the ‘scariest dudes’ in the UFC.

“The chance of fighting someone of that stature, and I pride myself for fighting anybody, anywhere, anytime, any weight class,” Holloway said. “He was already considered the number one pound-for-pound guy in the world before he even had the belt. He was one of the scariest dudes, they said. I just wanted to fight him.”

UFC 223 is also infamous for Conor McGregor’s bus attack incident, where he showed up in the bowels of the Barclays Center in Brooklyn after the media day on April 5th to confront Khabib. The Irishman threw a steel dolly through the window of a bus carrying the Russian and his teammates, injuring among others, Michael Chiesa and Ray Borg. Both of whom were scheduled to compete on the card, but had to be withdrawn.

How do you think Max Holloway would have fared against Khabib Nurmagomedov had they fought at UFC 223?