Wilder Accuses Referee And Former Coach Of Conspiring Against Him 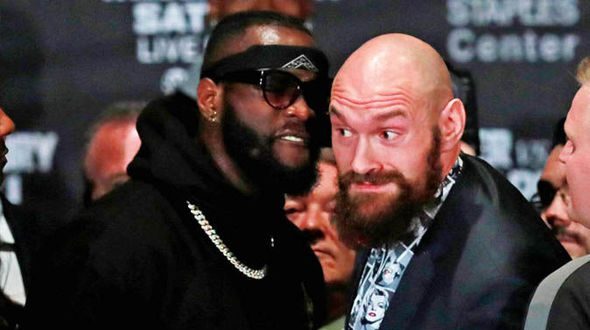 Since losing his WBC world title to Tyson Fury in their rematch at the start of the year, Deontay Wilder has continued to make outlandish accusations contributing to his performance. From blaming his walkout costume, to accusing ‘The Gypsy King’ of loading his gloves.

“My Water Was Spiked”

Speaking to 78SportsTV (transcribed by The Mac Life) however, Wilder took his accusations to a whole new level by stating that his water was spiked on fight night.

“About 15 minutes before going out to the fight, warming up on the mitts, it was perfect, I felt great,” Wilder said. “Until I went to the ring. That transformation, I was drinking certain water and stuff, trying to keep myself hydrated.”

“I just start feeling weird. My water was spiked as if I took a muscle relaxer or something like that. After a fight is over with and it don’t go in your favour you’re always looking for what happened. Certain things, the atmosphere just didn’t seem right. It felt like something was about to go down, and not in my favour.”

After the loss, Wilder parted ways with his coach and cornerman Mark Breland, after he threw in the towel in the seventh round as a result of the beating his man was receiving from Fury. Eight months on and not only does ‘The Bronze Bomber’ still has a problem with this, but he also believes that his former coach was in cahoots with Tyson’s team.

“If you knew Deontay Wilder, you’d know that if I’m gonna draw my sword, I’mma live by that sword and I’mma die by that sword,” Wilder said. “I’mma live and die by that, period. And I’ve been telling my people that for five years, so that ain’t nothing knew to them. So he knew that. When he did that, he already had orders not to do that.

“And on top of that, this motherf***er didn’t even give me a warning that he was gonna do it… But if you a part of the plot that ain’t gonna matter because that s*** gonna be on you at the end of the night. He had to fulfil the obligation, he had to do something. Talk about saving my life? Saving my life is stopping me from jumping off a building.

“When I’m in the ring, man to man, you ain’t saving my life… In round seven I’m getting myself back together and all of a sudden the towel is thrown in. What’s the odds of that? I’m gathering myself. My momentum is coming. While I’m looking into his eyes, he’s looking tired, he’s looking fatigued.

Not content with accusing Breland of conspiring against him, Wilder went on to accuse the referee on the night, Kenny Bayless, of either being drunk or colluding against him.

“His eyes looked like he took a cocktail drink before going into the fight,” Wilder said. “His energy felt like, ‘I’m gonna do something to you black man, but I’ve gotta do it. I’m a crab in the bucket.’

“He was leaning on me, he elbowed me as well. Elbowed me in my face as well too. The ref ain’t do nothing. Every time I’ve seen the referee he’s breaking s*** up. He acted like he ain’t know what was going on.

“Either this motherf***er, he was drunk or he was part of it. Which one was it?”

Wilder’s comments are sure to be met with some backlash in the boxing community. Dillian Whyte has already hit back at the former champion. Speaking to Sky Sports, ‘The Body Snatcher’ labelled ‘The Bronze Bomber’ a “coward and a disgrace”.

“This guy is just a disgrace,” Whyte said. “He’s a disgrace. He’s a disgrace, and I don’t think we’ll see him in the ring ever again. He’s a coward and a disgrace. The behaviour he’s shown and the way he’s acted, blaming everyone apart from himself, getting rid of the only person in his corner who knows anything about boxing? It’s weird.”

What are your thoughts on Deontay Wilder’s recent comments?