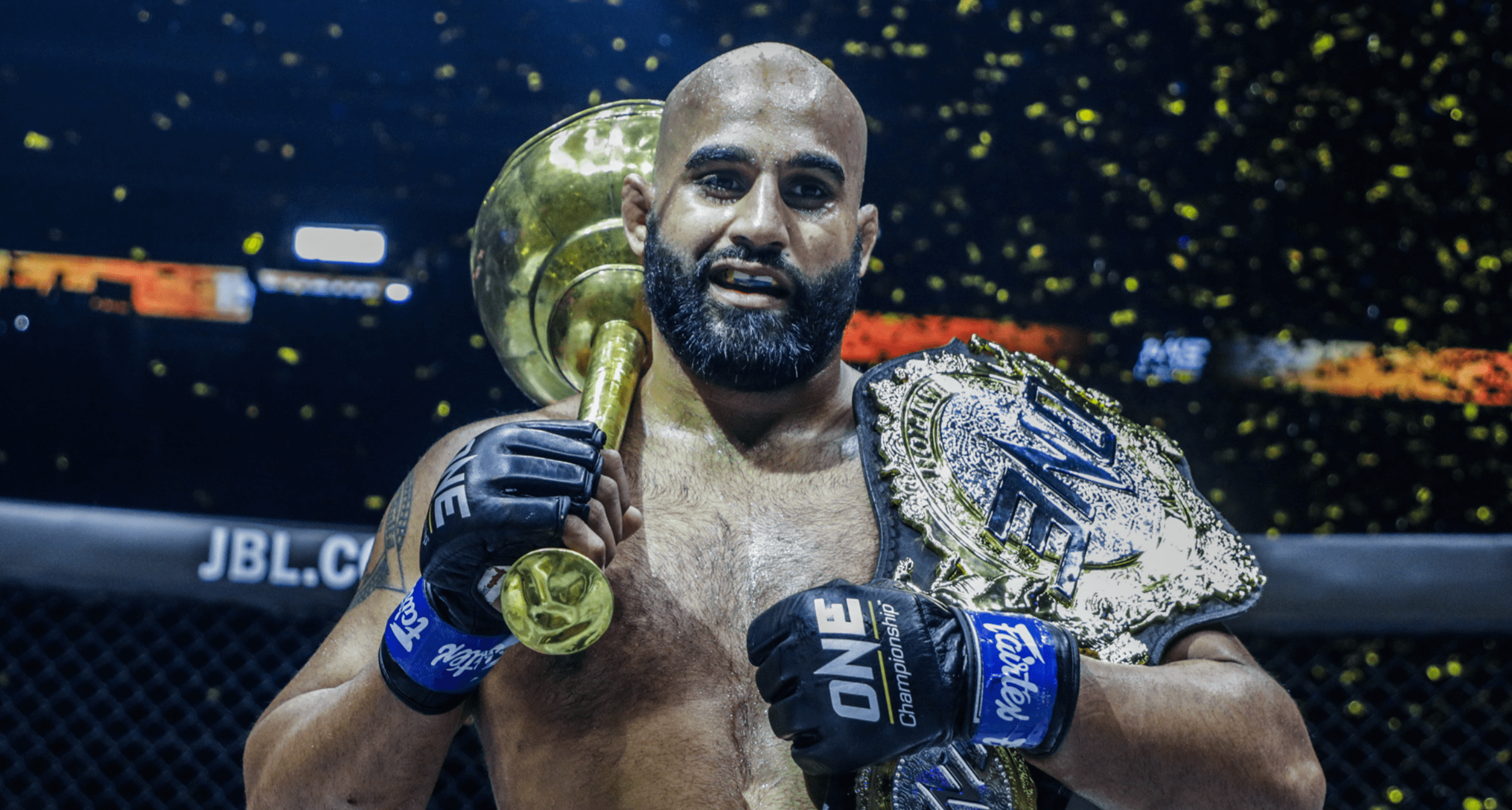 Arjan Bhullar made history at ONE: Dangal by becoming the first fighter of Indian descent to win an MMA world title, when he beat Brandon Vera to become the ONE heavyweight champion.

Bhullar dominated the fight from start to finish, and got the TKO finish in the second round. With the gold strap wrapped around his waist, the 35 year old says he wants to inspire his fellow Indians to follow in his foot steps.

Speaking to ONE Championship, Bhullar said that he hopes his win over Vera will inspire his compatriots, especially India’s uber-talented wrestling community, to try their hand at MMA.

“It’s really amazing being the first MMA world champion from India,” Bhullar said. “It’s a great honour and a great privilege. It’s going to be here forever. History and legacy are very important to me. It comes with a great responsibility, too. Now we’re going to grow the sport, make sure that it’s a bit easier for the next generation of fighters, and they know what’s possible.

“It means a great deal to me, personally, just to be a world champion and to represent my people. Like I said, it’s going to be there forever – being a world champion, being there first. I think for other wrestlers who come from the country and the great wrestling tradition that we have, they’ll see this is possible. The biggest thing you can do is to show that it’s a viable option, and it’s a great option.”

The Perfect Event To Make History

Wrestling arenas, known as Dangals’ in India, are widely popular in the Indian subcontinent, especially in rural Punjab. Growing up, Bhullar often watched his father compete at dangals, as he was also an accomplished wrestler in his heyday.

Winning the belt on a ONE card that had an Indian theme made the experience even more special for Bhullar.

“Yeah, it feels full circle. I’ve been in it since I was a little kid, and I have been to lots of dangals with my father,” Bhullar said. “I watched him compete there and I was able to do the same here. If anyone was going to do it for India, it was going to be me at an event called ‘Dangal’. I knew that for sure. As soon as I saw the promotional material, I knew that there was no way this wasn’t going to happen. I was convinced.”

Bhullar went 3-1 in the UFC, before signing with ONE Championship in 2019. The newly crowned champion now has a professional record of 11-1, and believes every win in his career led him to this moment.

“I have had a lot of big wins, but I think every win led to this,” Bhullar said. “Without those other wins, this would not have been possible. So I’m going to say yes, this absolutely is my biggest, most fulfilling, most life-changing win. Not only for me, but also for many people around me, my loved ones, and people around the world.”

Given his wrestling credentials, the general perception was that Bhullar would take the fight to the ground against Vera. However, his game plan was to beat the Filipino-American anywhere the fight went.

“The strategy was to beat him everywhere — stand-up or ground — in every way,” Bhullar said. “I think I showed that I had success in both areas. As a wrestler, that’s something I always turn to on instinct and it worked out great here as well.

Before his fight was booked against Vera at ONE: Dangal, Bhullar was offered a fight with Amir Aliakbari, but their stars didn’t align. The Iranian was later booked against Kang Ji Won at ONE: Fists Of Fury 2, but was knocked out in the first two minutes of the heavyweight clash. The newly crowned champion has been keeping a close eye on the undefeated South Korean prospect.

“I called out Kang Ji Won because I was offered Amir Aliakbari, that loudmouth Iranian, before Vera, and I couldn’t get booked,” Bhullar said. “This guy just punched Aliakbari out, and his teammate [Mehdi Barghi], within a month, and he’s undefeated and up-and-coming.

“So, I thought there’s no one else who has done that recently in the heavyweight division. Everyone else is pretty new, kind of figuring themselves out, so I wanted to reward him for his work.”

If he does defend his title against Kang next, Bhullar expects a great fight.

“If he accepts the challenge, I expect a great fight. He’s a great fighter. He moves very quick, he has good feet, good hands, and obviously, he can deal with adversity. He’s tough. But we’re not thinking about that right now, that’s down the road. Right now, it’s about the present moment.”

But for now, the Canadian-Indian plans to spend some time with his family to celebrate his big win.

“It’s everyone’s belt,” Bhullar said. “It’s the village’s belt, the joint family’s [belt]. Everyone will have a piece of it. I will leave it there for everyone to hold and to see and to fight over because everyone played a pivotal role.”

Would you like to see Arjan Bhullar make his first title defence against Kang Ji Won?