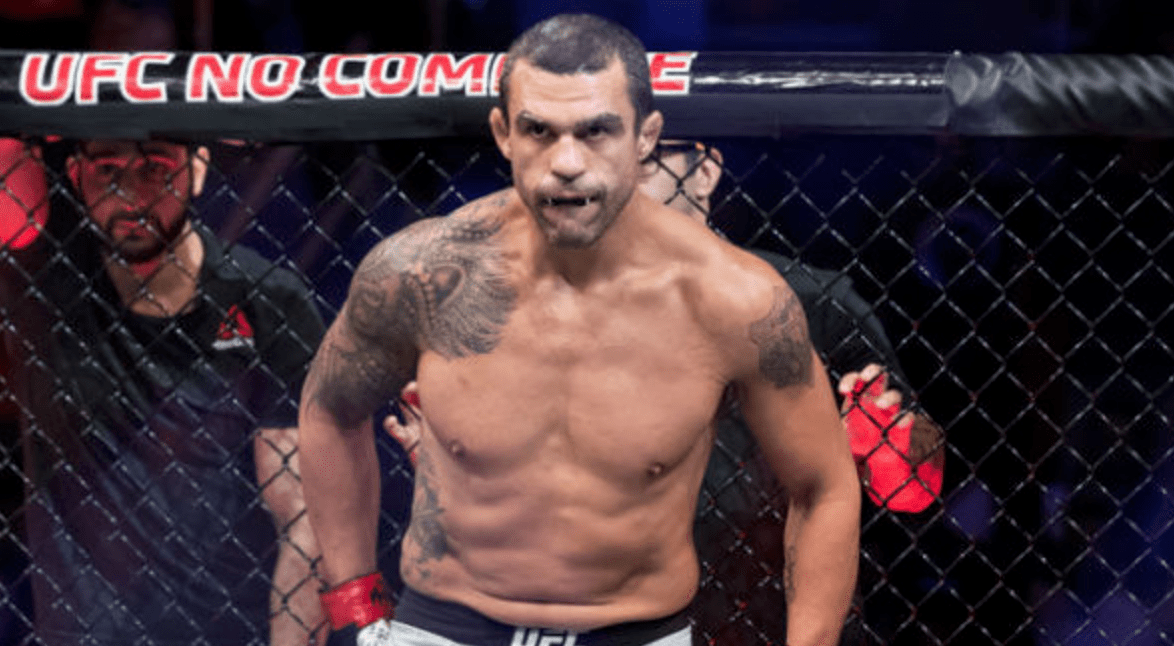 Former UFC champion Vitor Belfort has said he would ‘beat the crap’ out of Jake and Logan Paul in the same night, but accused the YouTubers are dodging him.

Belfort is set to face animal ranger and social media personality Mike Holston, better known as ‘The Real Tarzann’ in a boxing match on August 14th at the loanDepot Park in Miami. The bout is set to take place on the undercard of a Triller event headlined by Teofimo Lopez defending his WBA (Super), IBF, WBO, and The Ring lightweight titles against George Kambosos Jr.

This will be Belfort’s second professional boxing bout, having made his debut in 2006 against Josemario Neves, beating him via first round knockout.

Speaking to MMA Fighting, Belfort said that he respects Holston for picking one of the most dangerous guys in the industry for his boxing debut, unlike Jake and Logan Paul, who he says have been cherry-picking their opponents.

“It’s pretty exciting,” Belfort said. “I’m so pumped, especially doing the crossover, literally seeing who has the best hands if they can box together, the MMA guy or the boxer? My debut is going to be against a YouTuber that really is not picking an easy opponent like the other two brothers (Jake and Logan Paul) are. This is a guy literally fighting one of the fiercest guys in the industry, not picking up a wrestler [in Ben Askren] who doesn’t know how to throw a punch. Picking up a guy [in Tyron Woodley] who can now just throw one killer punch.”

In April, Jake TKO’d Ben Askren in the first round to improve to 3-0 as a professional boxer. He’s now set to face former UFC welterweight champion Tyron Woodley on August 28th.

While they have had stellar MMA careers, Askren and Woodley have little to no experience in boxing. As far as Belfort is concerned, they are the worst possible representation of MMA, as far as boxing is concerned, stating that neither would last two rounds against him in a boxing ring.

“I don’t have nothing against them,” Belfort said. “They go make their money but they’re not boxers. I can go fight Tyron Woodley with one hand and beat him up. [Ben] Askren? It’s not even a question. That guy’s a wrestler — a great wrestler but my kid can beat him up. My daughter — have you seen my daughter punch? My daughter Victoria can put these guys out. Because they don’t know how to box. My kids have boxed since they were kids.

“I just think they are the worst representation of MMA,” Belfort said. “These guys that you just mentioned, I can fight all of them in one night. I’ll put them out. They cannot even survive two rounds with me, these MMA athletes that are representing us in boxing.”

The Paul Brothers Are ‘Afraid Of Me’

Jake has made it no secret that his ultimate goal is a showdown with Conor McGregor, who’s one of the best boxers in MMA. He has also called out Nate Diaz and Michael Bisping in the past.

Earlier this month, Logan went the full eight rounds with Floyd Mayweather, who’s considered by many as the GOAT. However, Belfort claims that the Paul brothers are dodging real competition.

“The Triller guys said ‘Vitor, when we brought your name up, they are shaken up, oh no not him!’ and they’re choosing these guys, the wrestlers.”

The Paul brothers aren’t the only ones dodging Belfort, the 44 year old Brazilian claims.

“A lot of guys avoid me, especially these YouTuber brothers, they’ve been avoiding me for years and they’re looking for easy fights, easy money,” Belfort claimed. “They’re lucky cause I’ll rip their heads off. This guy came and accepted and I said let’s go.”

Would you like to see Vitor Belfort fight Jake or Logan Paul down the road?

Vitor Belfort will no longer face Mike Holston. Instead, he will take on Oscar De La Hoya in a boxing exhibition on September 11th.