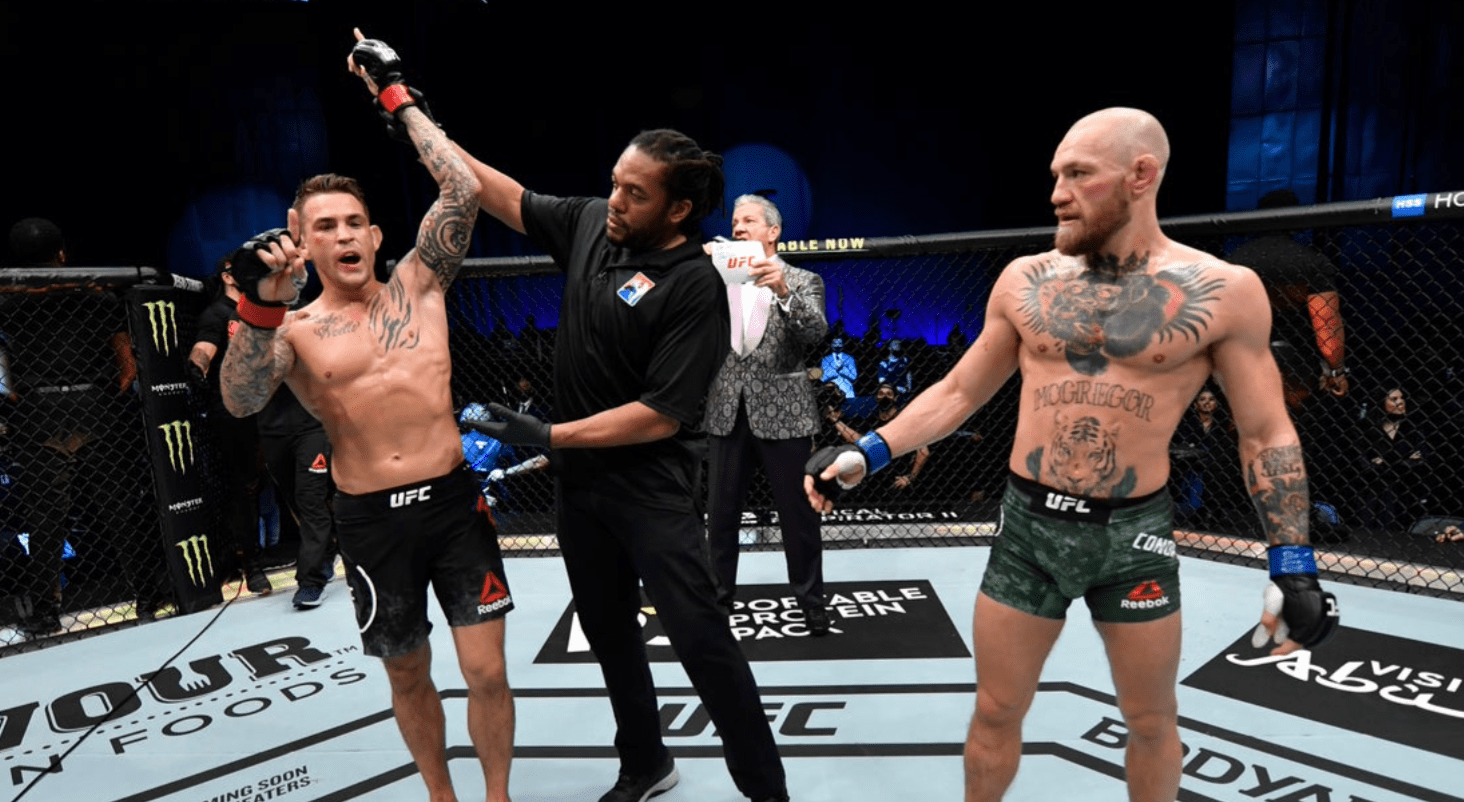 Almost two weeks removed from his loss to Dustin Poirier in the UFC 257 main event, Conor McGregor has broken down the fight and his performance.

Excited For The Trilogy

Taking to social media, McGregor said he was excited by the prospect of a trilogy with Poirier, and happy with his conditioning in their rematch on Fight Island last month.

“What a trilogy I now have on my hands,” McGregor wrote on his Instagram page. “Exciting! With a handle on the leg kicks I will get back to having fun in there. I was in second gear cruising this fight. Best condition I’ve ever been in. After the wrestling and clinch exchanges my shots still held their pop. First time for me with this so I am very encouraged to keep going. It was the first time I did not use/nor need the stool between rounds also. I did need the stool after tho that’s for sure.

“I am extremely happy I did not need to use the stool between rounds here anyway. Another first for me! I am most certainly on the right path. Despite the loss I am on the correct path of evolution.”

Leg Kicks And The Pacquiao Fight

Assessing his own performance, McGregor said that he deserved the loss and Poirier’s ferocious leg kicks, for taking the fight in preparation for a boxing bout with Manny Pacquiao.

“Thoughts on the bout: I enjoyed racking up some more time inside the famed UFC Octagon,” McGregor wrote. “40 seconds in 3 years is all I’d had up to this bout. I was savouring very second and enjoying my work. A little single disciplined in my approach and stance with mostly boxing. It’s what I get for picking this bout and opponent as a precursor to a boxing match against ‘Pacman’.

“I deserved to get the legs kicked off me going in with this thinking. This is not the game to play around with. Besides this tho my shots where sharp and I was in full control. Albeit the leg attacks where building up on me throughout the course. 18 in total thrown at me, with the final one buckling my leg fully, that was that.”

While McGregor said he wasn’t expecting to need a third fight with Poirier, he is excited at the thought of a trilogy with the Louisiana native nonetheless.

“The peroneal nerve compromised,” McGregor continued. “Fascinating! First time to experience it. Then a tremendous finishing flurry by my opponent. Hats off! A well fought fight by The Diamond. 1 a piece now with a Trilogy bout for all the marbles! Wow! Exciting! Not a trilogy I was expecting, nor the tactical affair I was anticipating, but I’d be lying if I said this wasn’t meant to be. This is exactly how this was always meant to be! Buzzing!!”

Despite Khabib Nurmagomedov retiring after successfully defending his lightweight title against Justin Gaethje at UFC 254, he currently still holds the belt, as Dana White has insisted that he could talk the undefeated Dagestani into returning. The UFC president however, conceded in the UFC 257 post fight press conference that he is unlikely to fight again.

After finishing McGregor in the second round, the general consensus has been that Poirier should fight for the title against either Charles Oliveira or Michael Chandler, who instantly put his name in title contention by finishing Dan Hooker in emphatic style in the UFC 257 co-main event.

Poirier however, has stated that he has no interest in fighting Chandler next, saying that he needs to prove himself further in the UFC. Should the promotion wish to see the former Bellator champion fight for the belt, ‘The Diamond’ has suggested that he fights Oliveira for the belt, while he sits back and sees how it plays out.

Responding to McGregor’s comments, Poirier was quick to express his willingness to fight the Irishman a third time.

“You know we are going to do it a 3rd time,” Poirier tweeted.

With the ball in Poirier’s court, it’ll be interesting to see whether he elects to fight for the title next, or take the money fight with McGregor.

What do you think Dustin Poirier should do next, fight for the title or give Conor McGregor an immediate rematch?