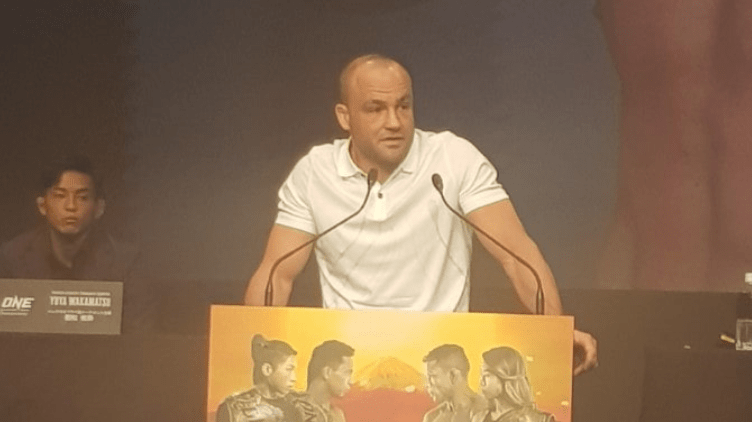 Eddie Alvarez is uncertain when he will be returning to action. But he is certain about one thing, he wants to add a third world title to his list of accolades when he returns to the ONE Circle, having already won world titles in the UFC and Bellator.

Now competing in ONE Championship, he wants nothing more than to win a third belt. However, in an interview with MMA Junkie, Alvarez said that the organisation wants him to earn a title shot.

“They said one or two fights,” Alvarez said. “I don’t even know what that means.”

His last fight saw him submit Eduard Folayang at ONE: Dawn Of Heroes in August 2019 in the ONE Lightweight Grand Prix semi-final. Unfortunately however, an injury prevented him from competing in the final. Still, ‘The Underground King’ believes he’s done all that’s needed to warrant a shot at the ONE lightweight title.

“I’ll do what it takes. I want world championships, and I want titles. I’ve always been patient. But I don’t know,” Alvarez said. “I want bigger names and bigger fights. If I haven’t proven it in the past 17 years that I deserve big names and be on that massive stage and fight for world titles, you’re just not watching the sport. If I can get in front of the champion, that’d be great. If not, I’ll fight the number one contender and then get there. It is what it is.”

Showing Up In Big-Time Situations

Alvarez had a rough debut in ONE Championship, losing to Timofey Nastyukhin by first-round TKO at ONE: A New Era in March 2019. With the coronavirus pandemic, the 36-year-old has remained stranded in the United States. However, he could return to action soon with the return of international events. And he has his eye on the reigning ONE lightweight champion, Christian Lee.

“He’s good, and he’s still growing. He’s young. He’s hungry. To be able to put myself against the champion of the promotion, I’m excited about it,” Alvarez said. “I show up in big-time situations when there’s belts on the line and when everything’s on the line. …

“No disrespect to the champion, but I think as many fights as he has, I’ve probably fought for more world title fights than he has actual fights. I don’t feel like I need to prove my mettle to someone like that. He’s talented. He’s a hell of a great fighter. But when it comes to resume and fighting world champions, I’ve fought them one after the other.”

Lee is scheduled to defend his ONE lightweight title against the Iuri Lapicus at ONE: Inside The Matrix on October 30th.

Does Eddie Alvarez deserve a shot at the ONE lightweight championship?