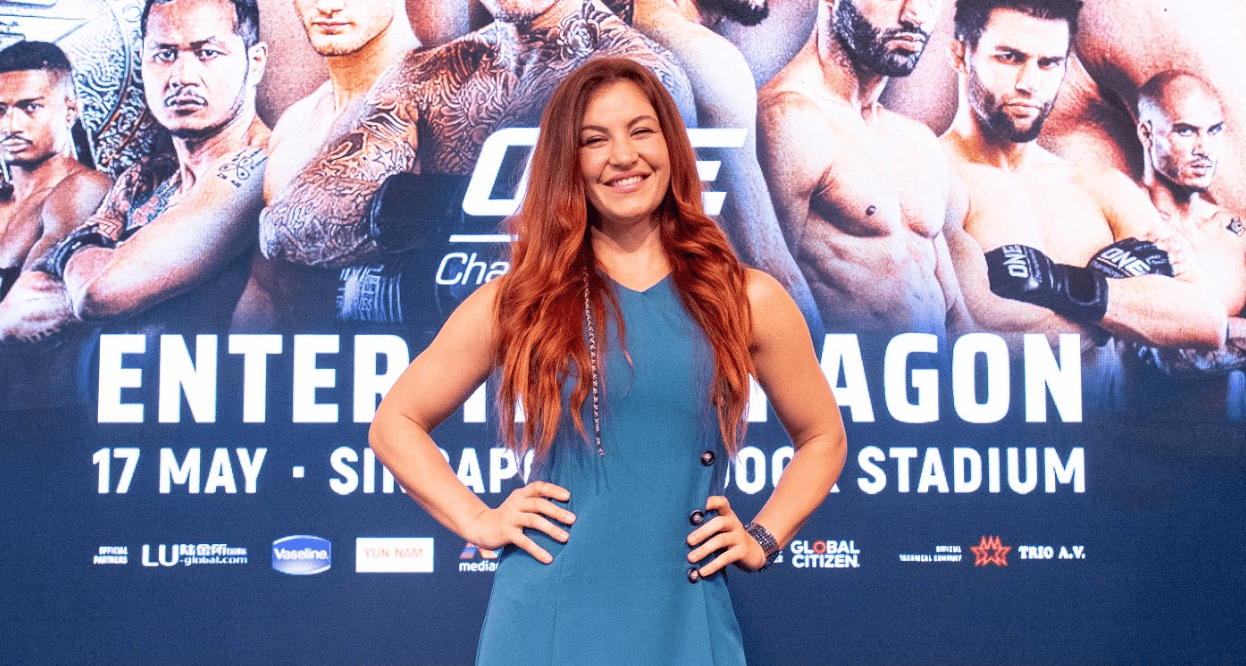 Nearly five years after her retirement from the sport, Miesha Tate will make her comeback against Marion Reneau at UFC Fight Night 192 on July 17th.

Tate last fought at UFC 205 in 2016, losing a unanimous decision to Raquel Pennington. The former UFC and Strikeforce bantamweight champion is one of the greatest fighters in women’s MMA history, and will forever be remembered for her two-fight rivalry with Ronda Rousey.

Speaking to SiriusXM’s Fight Nation (as transcribed by MMA Fighting), Tate said that she would love a trilogy fight with Rousey, and named two other former opponents she would be happy to run it back with.

“Ronda first, Cat [Zingano] second, and Holly [Holm] third,” Tate said. “Holly, I already beat her so, you know, she wants a rematch at me more but definitely Ronda would be prime. That would be first for sure and Cat’s a close second.”

Tate fought Rousey for the first time in Strikeforce and the second time in the UFC, tapping out to ‘Rowdy’s’ signature armbar on both occasions. Thanks to the improvements she has made during her time off however, the 34 year old believes a third fight between the two legends would end very differently.

“There’s not a doubt in my mind it would be different, for sure,” Tate stated. “I’m just so different myself. I don’t know how to explain, I just want you guys to see it on July 17th. Just things that I didn’t realise and I didn’t compute before as a fighter that I feel like I’m finally picking up at this stage in my life. I don’t know, call it maturity, call it maybe sitting back observing this sport and watching and not being under the pressure to compete all the time, has allowed me to kind of look at this in a more cerebral way.

“I used to be very much a brawler and tough. I still have the mental toughness, I still have the fight but I feel like for the first time I’m tapping into my fight IQ and really going to go about things in a different way than I did before, at least to start fights. Fights are fights, right? It’s liable to get crazy at any point but I’m much different than I ever was before.”

No Shortage Of Options

But even if Tate doesn’t get to fight the three women on her list, she’s confident that she’ll have no shortage of options.

“I will be the second-most hunted woman in the division, I feel like that for sure,” Tate said. “The champion will be number one but it seems like women are always interested in fighting me.”

After shocking the world by knocking out Rousey to win the bantamweight title at UFC 193, Holm put her belt on the line against Tate, but was submitted late in the fifth round. Speaking to MMA Junkie, ‘The Preacher’s Daughter’ said that she would like to run it back with ‘Cupcake’ if a win guarantees her a title shot.

“My plan is to compete for the belt, so if that fight ends up being on the way there, then absolutely,” Holm said. “I always like to avenge losses no matter what, so yes, I would like to do that, but I think sometimes you can get so fixated on one fight that you’re not focused on whatever is coming your way.

“Whatever gets you to the belt, that’s my ultimate goal and it would be awesome if I could go through and do it all. Avenge my loss [to Tate], then go to the belt.”

Rousey retired from the sport after her brutal TKO loss to Amanda Nunes at UFC 207 in 2016. She later transitioned into the world of professional wrestling, and has expressed no interest in a return to MMA. Zingano parted ways with the UFC last year and now competes in Bellator. She submitted Olivia Parker in the first-round earlier today at Bellator 256.

As for Holm, she was lined up for a fight with Julianna Pena in May but had to withdraw due to kidney swelling.

How would Miesha Tate fare in rematches against Ronda Rousey, Cat Zingano and Holly Holm?