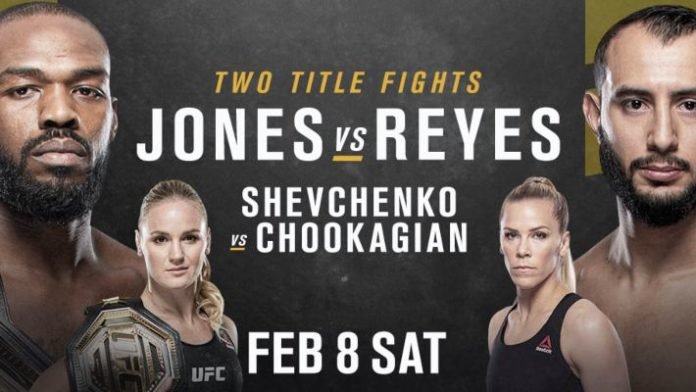 UFC 247 goes down on February 8th at the Toyota Center in Houston, Texas. The second UFC pay-per-view of 2020 will feature two title fights. In the main event, Jon ‘Bones’ Jones is set to defend his light heavyweight title against the unbeaten Dominick ‘The Devastator’ Reyes.

Jones is coming off a successful title defence, albeit via split decision, against Thiago Santos at UFC 239 this past July. While Reyes fought much more recently, scoring a first round knockout over former UFC middleweight champion Chris Weidman, in October at UFC Boston.

In the UFC 247 co-main event, Valentina ‘The Bullet’ Shevchenko will defend her women’s flyweight title against the number one contender, Katlyn ‘Blonde Fighter’ Chookagian.

Shevchenko is coming off a second successful title defence against Liz Carmouche, at UFC Uruguay in August. While her opponent Chookagian, is fresh off a win over fellow top flyweight contender Jennifer Maia, last month at UFC 244.

Eight weeks out from UFC 247, some of the other fights confirmed for the card include, Derrick Lewis vs Ilir Latifi and Lauren Murphy vs Andrea Lee.

As we get closer to UFC 247, we will post the very best pre-fight videos to this page, including the Embedded Series, Open Workouts, Face Offs and Weigh-ins.

And we will also include the official weigh-in results below.

And we will start off with the pre-fight press conference, which went down in Las Vegas, ahead of the UFC 245 ceremonial weigh-ins. The press conference featured Jon Jones, Dominick Reyes, Valentina Shevchenko, Katlyn Chookagian and UFC president, Dana White.

* Arroyo pulled from card after the weigh-ins and will be replaced by James Krause, who accepts the fight on less than 24 hours notice and weighed in at 183.5lbs.