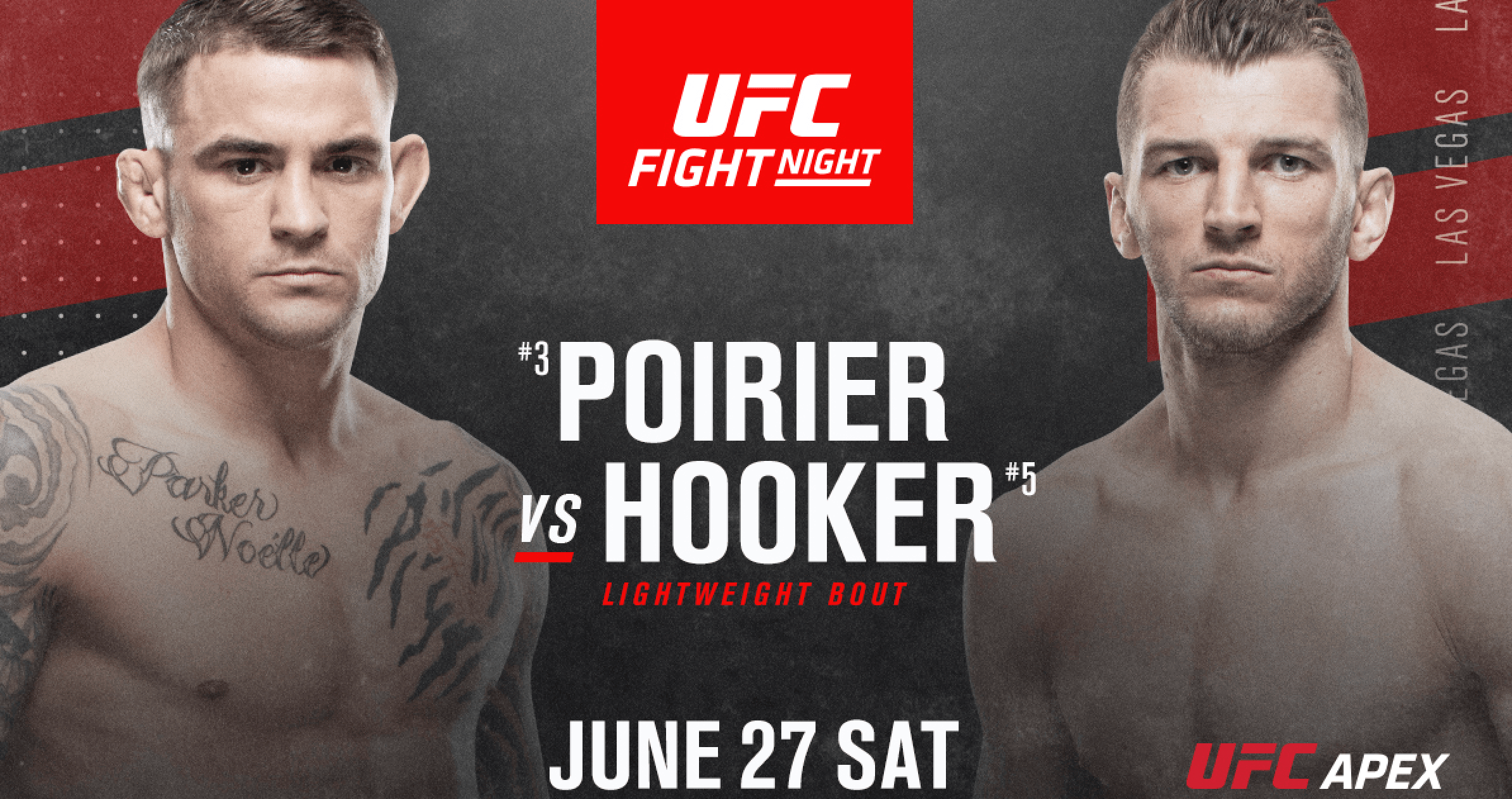 We now know the full lineup for UFC Vegas 3, which takes place at the UFC APEX in Las Vegas, Nevada on June 20th.

UFC Vegas 4 is set to go down on June 27th at the UFC APEX and will have a fight of the year contender in the main event. The UFC’s last event before heading to Fight Island will see Dustin Poirier and Dan Hooker headline, in a top five lightweight contest. The two were originally set to face off at UFC San Diego in May.

Poirier hasn’t competed since losing to Khabib Nurmagomedov at UFC 242 last September, after undergoing surgery on his hip following the loss in Abu Dhabi. While Hooker is on a three fight win streak, having come through tests against James Vick, Al Iaquinta and Paul Felder.

Mike Perry will take on Mickey Gall in the co-main event. With Ian Heinisch (who only fought six days ago!) vs Brendan Allen, Gian Villante vs Maurice Greene and Aspen Ladd vs Sarah McMann completing the main card.

Although more fights are expected to be announced in the upcoming days, four prelims have been confirmed so far. Jennifer Maia vs Viviane Araujo, Luis Pena vs Khama Worthy, Philipe Lins vs Tanner Boser and Sean Woodson vs Kyle Nelson

The promotion’s first fight night on Fight Island (on Yas Island, Abu Dhabi) will see three title fights on the main card. A fun featherweight clash has now been added to the prelims of the July 11th card. Makwan Amirkhani will take on Danny Henry.

Umar Nurmagomedov will finally make his promotional debut on Fight Island. Khabib’s cousin will take on former Cage Warriors champion Nathaniel Wood, in an exciting bantamweight clash. The fourth fight night on Fight Island will be headlined by Robert Whittaker vs Darren Till.

Earlier this week, UFC president Dana White announced that Stipe Miocic will defend his heavyweight title against Daniel Cormier in the UFC 252 main event on August 15th. The trilogy fight will be joined by another big heavyweight clash, as Junior dos Santos will go up against Jairzinho Rozenstruik.

JDS will be looking to bounce back from back-to-back losses against Francis Ngannou and Curtis Blaydes. Rozenstruik will also be looking to get back to winning ways, having lost for the first time in his last fight to Ngannou.

A rematch between Magomed Ankalaev and Ion Cutelaba is in the works for UFC 252, after their first fight ended controversially earlier this year at UFC Norfolk. The two light heavyweights were originally booked to rematch at the original UFC 249 on April 18th. Ankalaev won their first encounter after only 38 seconds, after Cutelaba pretended to be hurt a bit too well and the referee stopped the fight.

Earlier this week, we reported that the lightweight unification bout between Khabib Nurmagomedov and Justin Gaethje was in the works for UFC 253, which is set to go down on September 19th in Abu Dhabi. Although it is believed that as things stand, this won’t be on Fight Island.

Speaking to the media ahead of this weekend’s UFC Vegas 2 event, Dana confirmed that Khabib vs Gaethje is the front runner to headline UFC 253. September’s pay-per-view card was already planned to take place in Abu Dhabi before Fight Island came about.

Which upcoming fights are you most looking forward to seeing?