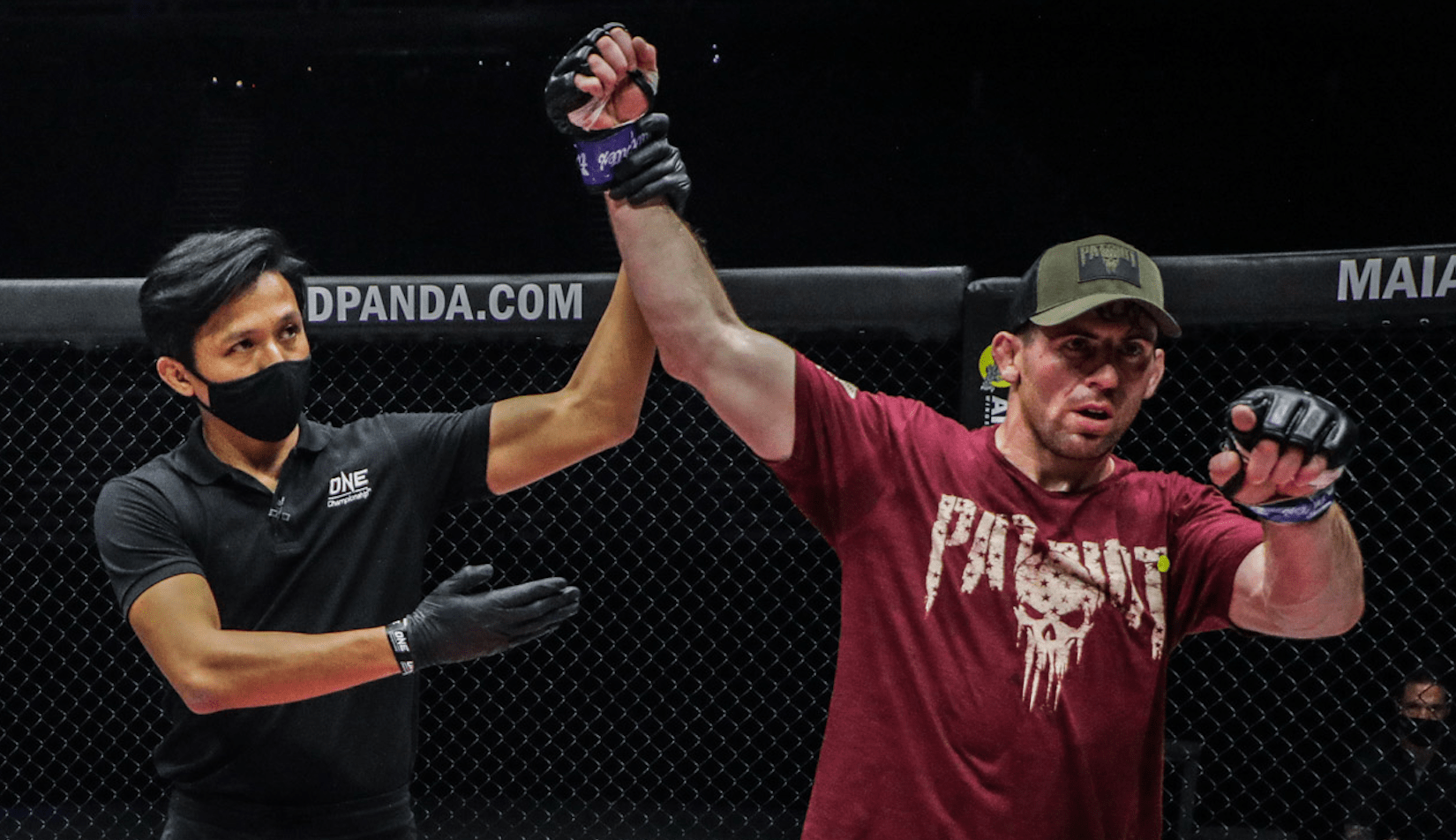 Tyler McGuire thinks he’ll be the next in line to fight for the ONE welterweight title with a win over Raimond Magomedaliev at ONE on TNT 1 on April 7th.

After two years on the sidelines, Maguire returned to the ONE Circle last December and beat Agilan Thani via unanimous decision at ONE: Big Bang 2. Although he managed to get his hand raised on the night, things didn’t exactly go smoothly for the American during fight week.

Speaking exclusively to Asian Persuasion MMA, Maguire recalled his struggles in the lead-up to the Thani fight, including food poisoning.

“I was tired, [and] that’s probably the most adversity-filled fight week I’ve ever had,” McGuire revealed. “I actually got food poisoning on Tuesday night and I lost six pounds non-voluntarily. We’ll leave it that way. That was probably me at like 75 percent in the cage. I didn’t get a warm-up that fight just due to some weird scheduling. I walked out there with like a 40-second, 30-second warm-up. I really wasn’t warmed up until the third round, I think.”

Magomedaliev will be coming into ONE on TNT 1 on the back of two consecutive first-round finishes. His most recent victory came against Edson Marques via knockout at ONE: Collision Course 2.

McGuire praised Magomedaliev, saying that he’s just as tough as any fighter coming out of Dagestan, but what sets him apart from his compatriots is that he isn’t primarily a grappler.

“I mean really like anybody from Dagestan with a beard, they’re all killers you know,” McGuire joked. “These guys probably throw leg kicks in street fights. It’s like Hawaiians, you know they’re all tough, so he is a bit different though in the sense that he’s not primarily a grappler, which kind of breaks the mold a little bit.”

However, McGuire thinks Magomedaliev has shown a few holes in his game, which he plans to exploit at ONE on TNT 1.

“We saw what he did against [Joey] Pierotti, the guy has good wrestling defence, but we’ve also seen him against [James] Nakashima that pressure can start to play in effect,” McGuire said. “I think he’ll come ready. As far as me, I’ve got to be wary of the range attacks when I close the distance.”

The 35 year old also thinks that the winner of his fight with Magomedaliev will go on to face the reigning champion, Kiamrian Abbasov.

“I don’t really see who else would be ahead of me,” McGuire said. “I know there’s some other dudes with beards from Dagestan that are tough and upcoming. Everybody that I’ve fought has either fought for the title or had the title. Chances are if he beats me he’s gonna go fight for the title, so I think if I can get past Raimond, which I’m not looking past him at all, he is a very formidable opponent and a deserving challenger. If he goes on to beat me, I think the winner of this is going to get it.”

McGuire also heaped praise on Abbasov, who successfully defended his title by finishing James Nakashima in the fourth round at ONE: Inside The Matrix 2, in his most recent fight.

But while McGuire thinks Abbasov is a dangerous fighter, he thinks he matches up well with the Kyrgyzstani.

“That dude’s a beast, you see how he came back from adversity [against] Nakashima,” McGuire said. “I mean I had Nakashima winning that fight and then just like that [Abbasov TKO’d him]. I said in previous interviews that Abbasov was dangerous for five rounds. He’s dangerous for 25 minutes right and even when he’s resting he’s not really resting, he’s just reloading.

“I do feel like I match up well [with Abbasov] because he likes to create car wrecks with his striking and all that and I do pretty well with car wrecks. It’s gonna come down to athleticism and mental fortitude and I think that’s where I like the match up.”

After the then champion Ben Askren temporarily retired from the sport in 2018, Maguire fought Zebaztian Kadestam for the vacant welterweight title at ONE: Warrior’s Dream, losing via knockout in the dying moments of the fight to lose for the first time in his career.

Should McGuire win the title down the road, he’d love to run it back with the Swede.

“That’s the one that got away, I do think if it was a three-round fight, I won that fight,” McGuire claimed. “There’s nothing I would like more to run that back if I was ever fortunate enough to win a title I’d probably give Zebastian the first shot, just to get it back.”

Do you think Tyler McGuire can beat Raimond Magomedaliev at ONE on TNT 1?