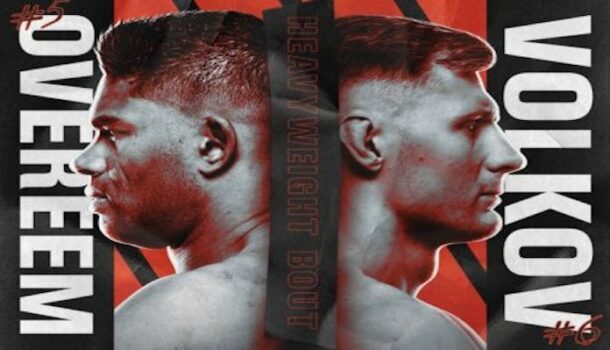 UFC Vegas 18 goes down on Saturday night at the APEX Center. The promotion’s first event back in Nevada in 2021 will see a top six heavyweight contest between Alistair Overeem and Alexander Volkov.

Overeem has won four of his last five, all by way of TKO. His only loss came against Jairzinho Rozenstruik at UFC Washington DC, when he was stopped in the last few seconds of the fifth round, having dominated the whole fight. Volkov is coming off a second round TKO win over Walt Harris last October at UFC 254.

In the co-main event, Cory Sandhagen and Frankie Edgar face off in a top five bantamweight clash, with a potential title shot awaiting the winner. In his last outing, ‘The Sandman’ bounced back from his first loss in the UFC against Aljamain Sterling, by finishing Marlon Moraes in the second round at UFC Fight Island 5. The former lightweight champion is coming off a winning 135lbs debut against Pedro Munhoz at UFC Vegas 7.

Elsewhere on the UFC Vegas 18 main card, Michael Johnson and Clay Guida face off in a lightweight matchup not to be missed, and Manel Kape finally makes his promotional debut against Alexandre Pantoja.

Askar Askar’s featherweight clash with Cody Stamann, which was set to feature on the main card, was scrapped on the day of the fights after ‘Bullet’ wasn’t medically cleared to compete.

This Is How The MMA World Reacted To UFC Vegas 18:

The UFC returns next weekend with UFC 258, which will see Kamaru Usman defend his welterweight title against Gilbert Burns in the main event.